http://www.blogger.com/template-edit.g?blogID=27684744 ARTYFACTS: The passion of Joan of Arc – with Portishead and Goldfrapp musicians

The passion of Joan of Arc – with Portishead and Goldfrapp musicians 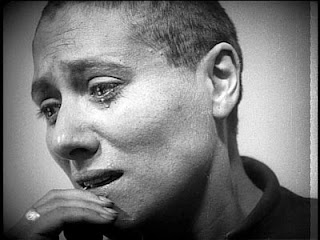 Joan of Arc, the 1928 film, closed the Brighton Festival, and it was a fine and fitting ending. In a Festival that had human rights at its heart, a movie that showed a young woman being martyred at the hands of old men in power, was entirely relevant.

As we speak young women (and men) are being imprisoned, tortured and killed by ‘old men’ regimes across the globe. Just before leaving the house I saw the police in Barcelona cruelly beating young people in a sit down protest against the ‘old order’. The woman in Libya who had been gang raped. In Bahrain women have been imprisoned and tortured, Berlusconi and Strauss-Kohn have behaved like grubby, old, priapic abusers. But it’s the sexual and violent actions of old leaders clinging onto their own ill-gotten gains, that resonates. Think Burma and the remaining despots in the Middle East.

As a silent movie, the music didn’t clash with any dialogue. The film with its upward looking camera angles at the old priests, judges and army is pointing the finger of scrutiny. But it is the actress playing Joan’s, that is astounding. Mostly big close-ups, her expressions are a language in itself. Throughout the film your mind brings up parallels and contemporary issues. The live choir and musicians rose to the occasion and the finale, when Joan is burnt at the stake, was intense. Well done Brighton Festival for bringing some real politics into art.