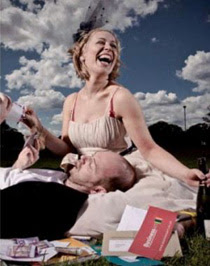 It’s a simple morality play in reverse, where dodgy characters and dodgier temptations lead the couple to reject the banality of their lives and jump into a Dionysian frenzy of a weekend that ultimately changes their lives. They both reject the habits and conventions of their lives for a little adventure.

I revelled in the language and swearing as it’s the two worlds I know best, a clash between Scottish working and middle class cultures. I knew every single street, pub and geographical reference and every single character. As I said, Medium Bob is not as developed a character as the lawyer, but that’s a quibble. Having a profession (lawyer) is as much a trap as having no profession. Both are stuck in separate grooves and just happen to come together in a bar.

A few people left because of the swearing but why on earth do these cretins go to the theatre? Is all theatre to be a reflection of their own, limited, polite worlds? Didn’t they see that the play was about THEM, middle-England’s dull, petty and average expectations? In any case, the rest of the audience loved it and the three encores were well deserved.

It's good to hear that the dialogue in a play from refined, conservative, 'you'll have had your tea' Edinburgh can still shock some sensitive souls in... did you really say Brighton !?!?! WTF?