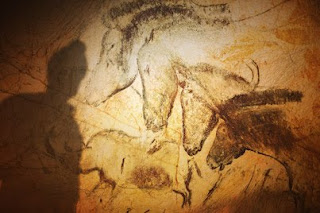 Although I can’t be doing with 3D, and this movie just confirmed by views, this was a fine film. Herzog reaches across the abyss of time to these 32,000 year old painters with his usual eccentric aplomb. We’re taken inside this low ceilinged cave but it’s really a journey into the minds of Cro-Magnon man and therefore ourselves. I watched it from the balcony of the Duke of York's, our local arthouse cinema, which resembles an old cave. The screen's a little small, so it was like watching a cave from within a cave. Now I could get all Platonic here and talk about epistemology and the representation of representation, but that's another cave story entirely, or is it? At one point that's exactly what one of the narrators does, pointing out our need to represent, the film camera being nothing more than a species of cave painting. So don't expect some polished and superficial BBC Attenborough documentary. This is Werner Herzog, thank God!

Years ago I ventured into the Altamira cave in Northern Spain, and had my own mind blown wide open by these beautiful, coloured, full perspective paintings set at the back in complete darkness. It was truly moving to stand in front of hand prints tens of thousands of years old, formed by blowing saliva and ochre across a hand pressed to the rock. I also swam into the darkness of a cave in Belize this year to see the sacrificial victims of the Maya. This cave, the Chauvet cave, discovered in 1994, has images and contents that are much older, at 32,000 years. It had been hidden by a rock fall some 20,000 years ago.

Deep in the cave, only where it’s dark, lie these exquisite paintings, in black outlines, mostly of animals, but also the silhouetted hand of a man with a crooked pinkie. The faces of the lions in particular, are those of animals on the hunt. Their world is carnivorous and dangerous. Man was clearly both predator and prey. Like Altamira the artists used the contours of the rock for effect, cleaned the surface before painting and overlain one image on top of the other.

Interestingly, there’s only one human figure, and that’s of a women’s bottom half, a strange image of a woman having sex with a bull, painted on a rock that hangs from the ceiling like a huge phallus. My own rambling thoughts on cave art, associate them with sexuality and fertility, although this wasn’t mentioned in the commentary. It is possible to see these images as the earliest examples of the evolutionary theory of aesthetics that sees them as symbols of sexual power, non-utilitarian expressions of power through excess. The animals are often in pairs, with male and female represented. But in the end it’s all speculative.

Nicholas Humphreys even posits a theory that these images came from minds fundamentally different from our own, simpler, pre-linguistic and symbolic. He draws on evidence from the drawings of autistic children with little grasp of language to suggest that these painters were not thinking artists but the last of the innocents. Their lack of language gave them the focus to draw these naturalistic images, without conceptual and categorical interference. This explains the naturalistic realism of the paintings, something that was to be lost until the Renaissance. The deliberate art of the Assyrians, Minoans and Egyptians is very much the product of conceptualising minds. This is a fascinating hypothesis and explains the naturalism, overlapping and repetition. It also explains the lack of human figures, as what language did exist was probably social.

Most of all it gets us away from the shamanism of Williams in The Mind in the Cave, and many of the 20th century musings around mystical, spiritual and reigious meaning and rituals. Most of the commentators in the film are children of the 60s, and love a bit of spirituality. I much preferred the down to earth palaeontologists, geologists and scientists, with their carbon dating and careful hypothesising.

Inside the cave of your own mind

In any case, watch this film, laugh at the wonderful eccentrics, then think deeply about what it all really means, for the cave is the inside of your own mind. It’s convoluted, dark, dangerous, lustful, quirky and largely unknown. Sometimes you have to sit still in the modern cave of the cinema to experience the strangeness and wonder of your own mind. When I emerged into the night, having gone in when it was light, it did feel as though I had literally been in the cave. Was that cave really a Cro-Magnon cinema?

I enjoyed your thoughts on both film and cave, but wondered who Humphreys is? Trying to get insight into what happened in our minds as they were excites me, as the legacy of our pre-written heritage seems massive to me...