http://www.blogger.com/template-edit.g?blogID=27684744 ARTYFACTS: Early Vermeer (Edinburgh) - three is not an exhibition!

Early Vermeer (Edinburgh) - three is not an exhibition!

When does an exhibition cease to become an exhibition? When it has so few paintings that they fit into a small bathroom. The first problem here, is the paucity of works – only three. The second problem, is that even these three works are placed in too small a room, so that you’re bunched together trying to find a space to look and reflect. There’s another problem, in that it’s almost impossible to find, as the signage leads you on a labyrinthine journey round the galleries. I’m sure many people just give up. In any case, I came this far, so what of the three paintings? 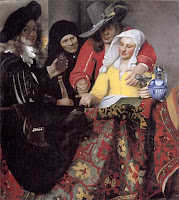 Best of the tiny bunch with its clever focal point (the glint of the coin), reminiscent of the most wonderful point of focus in the history of art, the point at which the milk pours from the milkmaid’s jug. There’s also the yellow bodice and white blouse, an early hint at what was to become Vermeer’s hallmark palette. But it’s all a bit moralistic (the intention of course), with the hand on the breast, grinning older man, and greedy Madame. It’s all about the moral dangers of alcohol, public houses and brothels, and all a bit staged. No doubts about the authenticity of the painting as it appears in the background of his later paintings.

Diana and Her Nymphs 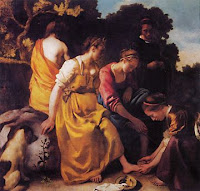 The composition is fine, with that sense of stillness that the later Vermeer mastered, perhaps because of his dependence on optical devices, but the broad brush strokes are too diffuse and the work lacks action and therefore impact. There’s some dispute about whether this is a Vermeer or not. For my money, it’s not. Compare it to the two other paintings in the room, and the difference is stark.

Christ in the House of Martha and Mary 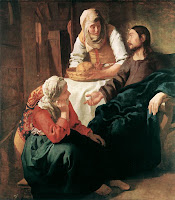 Sorry, but this is a work of such poor quality that it diminishes rather than enhances Vermeer’s reputation. The Christ figure is badly composed, with its narrow trunk, odd arms and big hands. It’s a hideously distorted figure. The colours are banal and the soft focus only makes the image muddy and indistinct.

All of this really does make you think that Vermeer could only really paint with the aid of optical devices (see Secret Knowledge by David Hockney). These paintings are larger than the later Vermeers as the optical devices he used could not project at such a size.These three were painted 1653-1656. The paintings after 1657 are so much smaller, more precise and of such a stunning compositional and atmospheric quality that they make these early works look amateurish. It’s al wonderfully revealed in Philip Stedman’s Vermeer’s Camera.

This could have been so much more, if the curator had contrasted these works with his later masterpieces or at least included is next picture with a lone woman in a room – a sort of transition into his later work. As it stands, it’s three immature and not very good paintings, masquerading as an exhibition.