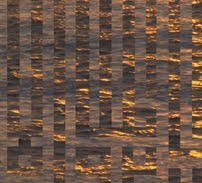 I rarely look at the blurb on handouts or labels on artworks before looking at them. So what does one make of these two works with little or no prior knowledge? Few would have guessed that there was kufic script in the Su piece, with its Sinan symmetric inversion. Fewer still would have seen any real relevance to national borders, identities and ideas in any of these works. They could just as easily have been interpreted as modern day Romanticism, images of nature, abstract video art, even some Briget Riley reflection on form.

In fact, as the artist’s sidekick explained (he was there but puzzlingly chose not to speak) it’s about the fluidity of borders, ideas and people. That’s fine, but these precise representational goals are at odds with the vagueness of the art. I know a little bit about this area and stood on the Euphrates Dam just a few weeks ago, where the problems of water shortage, border disputes, colonialism, Kurdish identity, religious schisms and many other complex political issues were discussed in detail. Ataman uses the word ‘narrative’ a lot, but these works contain little in the way of narrative, that’s for other art forms that use language, in its widest sense. My beef is the fact that we have to second guess or read too much to ‘get’ the representational message. Once you’ve got the water & fluidity message, you’re left with little more.

The new piece, Mayhem, simply lacks the power it promises. It’s dwarfed in the huge space that is the Old Municipal Market, and when it comes to rushing water, lacks that most vital of ingredients – SOUND. It’s the size and roar of a waterfall that makes it terrifying. Inverting the waterfall also emasculates its power. You no longer feel that you could be pulled over its edge. I went back for a second time to see if I had missed something. I’m not sure that I had. This time, oddly, the roof had leaked, leaving puddles everywhere, including on the artwork itself. People’s footprints were appearing on the floor projections. The images are too small to have the desired effect i.e. the disorientation when standing between the screens or the feeling of danger with plunging water into the floor. If they had been four or more times larger, all of this may have worked, especially the floor projections. ‘Mayhem’ it is not.

As for the background narrative of Israel having nearly been in Argentina and so on – it’s just reinjecting a narrative into images that say nothing much about that issue. I heard him espouse this ‘narrative’ on Radio 4 this morning and remain unconvinced by his aims and achievements in this work. Ataman has a habit of hyperbolic inference. For example, when describing his work in relation to history, ‘all history is fiction’. In this case ‘all borders are fiction’. He’s given to this sort of statement. But this rush to relativism is an easy option in art and often fatuous. The philosophy of history, and geography, is a complex subject not easily reduced to extreme platitudes. This is representational art where the representational narratives have to be explained on handouts.