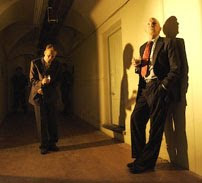 Few well heeled art lovers have experienced any rum dealings with authority or the police. They tut tut at the behaviour of rioters in London but state control and violence is the stuff of TV and the Sunday newspapers, not their lives. Having been kettled this month and had my photograph taken, without my permission, by the police, I've become a bit angry about their role.
This full on production can come as a bit of a shock to passive theatre goers. You don’t get to sit and gawk, you’re pushed, cajoled and forced into the action. Actually, it is quite refreshing to watch people who are used to telling others what to do being controlled in this fashion – they don’t like it one bit. Middle England’s middle managers are a smug lot, so well done to the cast who make them feel uncomfortable. You literally see and hear people complaining about the actors being rude!


Seriously, apart from these whiners, who clearly didn’t understand what was going on and see audience discomfort as having no place in theatre, this work sits perfectly in this festival. Andrew Comben and his team have brought politics into the cosy art world. It’s a brave move and it’s about time. The festival has too often pandered to middle England types with its cosy Radio 4agenda.

Burma and its oppressed, elected and imprisoned leader has been chosen as thespringboard, but freedom, fear and human rights are the big themes. This is Pinter territory. As Aung San Suu Kyi said ‘real freedom is really freedom from fear’ and you have to experience fear to understand this form of freedom. So get yourself along to the dank cellars of Brighton town hall with its corridors and police cells and feel the fear.