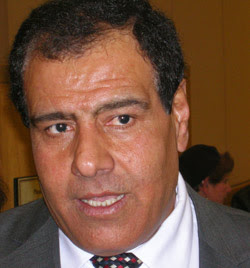 It was electrifying. The audience was transfixed by the emotion of the event and the power of his arguments and the tragic story of how three of his daughters were blown up in front of his eyes by an Israeli tank shell. You may remember that this was broadcast by a brave journalist on Israeli TV. At times heart rending, he moved from stories about his mother and upbringing as a refugee in Gaza, to his struggle to become a Doctor, the bulldozing of his house, the loss of his wife then daughters, to a strong and well-argued appeal for the September recognition of Palestine as a state.

His moral authority obviously comes from the events he has been through but it’s subtler than that, as he decries those who ‘live to fight’ in favour of those who ‘fight to live’. To be clear he sees the Palestinian problem as a man-made disaster that needs to be rectified. He is clear about not labelling people by nationality or religion, not universalising but sticking to a moral code grounded in the simple ethics of reciprocal respect, dignity and help. To be clear, however, he thinks the Palestinians have been dehumanised by the Israelis (not all) and have lost their basic rights to be safe, secure and healthy.

But his talk really came alive when he addressed the political issues head-on. It is time, he thinks, for the west and Israel to learn from the courage of young people in the Arab Spring. Today the Rafah Crossing was opened and this is the first step in opening the way for a two state solution, based on 1967 borders, with land swaps and East Jerusalem as the capital of Palestine. The General Assemblyl, especially the US, in September, must ratify the Palestinian State. The map is there and if the US is ‘marketing’ justice, they have no choice.

The problem here is the Likud Party, the swing to the right in Israel and Netanyahu’s hard-line policy of settler expansion and no compromise. The key, therefore is a brave move by Obama to deny Israel US support unless they negotiate. To continue, as they are, in the Jordan valley and further settlements is the politics of hate. However, there are voices from within Israel such as former attorney general Michael Ben-Yair, ex-foreign ministry director Alon Liel, former parliamentary speaker Avraham Burg and Nobel Prize laureate Daniel Kahneman, who want the west to push for a UN resolution. Obama has a choice – the future of the region as a whole or propping up and ever more aggressive Israel. The Arab Spring could turn into an endless summer or a winter of discontent, depending on the outcome.

I have seen N Ireland solve its differences, with the help of Clinton, the Balkans have calmed down and despots are falling across the Arab World. It is surely time that this problem be solved. I bought his book I Shall not Hate to give to a young Palestinian friend of mine and shook his hand. He recognised the name as Palestinian and all he asked was that I personally back this cause. This is no sentimentalist. He’s a smart, hard-headed man, who has a clear goal and is devoting his life to seeing it through, so that his daughters did not die in vain. This is integrity and courage at its best.

Thank you for writing this, Donald. It made me go back, with sadness, to this from nearly 5 years ago, since which time things have gone backwards. But the changes in Egypt, the US, and elsewhere do surely now hold out some real hope.

Yip.I posted a comment on your piece. I do feel, however, tat the Arab Spring plus the September UN move may result in a shift in US policy.