http://www.blogger.com/template-edit.g?blogID=27684744 ARTYFACTS: We steal secrets. The story of Wikileaks: It all started with an unexpected WANK

We steal secrets. The story of Wikileaks: It all started with an unexpected WANK 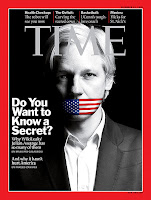 
This position has been strengthened recently by Snowden who claims that, “The 4th and 5th Amendments to the Constitution of my country, Article 12 of the Universal Declaration of Human Rights, and numerous statutes and treaties forbid such systems of massive, pervasive surveillance. “ This, I fear, is correct. The US has gone feral on information. Snowden makes another point which Assange has held to for a long time, the need for individuals to hold principles that transcend national interests. They can isolate Assange, torture and lock-up Manning, pursue Snowden, but there will be a long line of people willing to step into their place, until the debate is done. Wikileaks is alive and kicking.