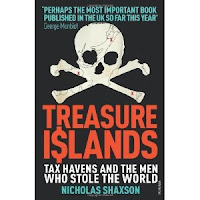 A fine book, full of detail, that uncovers the murky world of the ‘second British Empire’ – tax havens. Let me put my tax cards on the table. I’ve been out on UKuncut demos, been kettled and had my photo taken and mug videoed – all because I object to pin-stripe theft. There really is one law for the rich and another for the poor and it’s crippling the world economy, with a flood of capital out of developing countries as well as the rich salting away their treasure. And let’s be clear, this is about banks and bankers – the pinstripe infrastructure of advisers and lawyers are compliant but it’s really those bottom-feeders the bankers who are to blame. But it’s not about bank accounts. No, it’s about brass plaque trusts and companies – smokescreens. Tax evasion is abusive. Now that I’ve got that off my treasure chest….

The City of London is a big player – unaccountable, secretive and abusive, it lobbies and protects these practices. The British component is huge, centred around Jersey, Guernsey and the isle of Man but also the British Virgin Isles, Caymen Island and Bermuda. It’s big and it’s global. Criminal money and practices are mixed up with other money. None of this is clean.
Is there a clean-up? Not really. But make no mistake, public opinion has swung against the practice and is rock solid – we hate it. But Osborne and others are playing a game of obfuscation. The weasel word ‘competition’ has crept in. We need ‘competitive tax markets’. Read that again. It makes no sense. It’s a race to the bottom, where reasonable, democratic decisions by states are undermined by the few for the benefit of the few. All tax havens are an affront to decency, fairness and even fair markets. The book made me angry, the talk made me angrier.