http://www.blogger.com/template-edit.g?blogID=27684744 ARTYFACTS: Flaming Lips – terror, joy and light side of the moon

Flaming Lips – terror, joy and light side of the moon 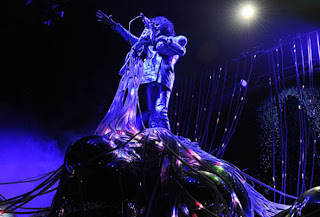 Almost impossible to describe the light show but if anyone in the audience was on acid they’d be certifiable at the end of the show. Wayne Coyne stood, gulping down Red Bulls, high on a podium and two massive bunches of optic cables emerged from his groin, looped back on either side behind him up to the roof and along the front of the stage. These pulsed with light throughout the show. The back of the stage was a solid wall of intense light and colour, and along the front of the stage were huge silver hemispheres that reflected the output of what must have been the most expensive electricity bill the Dome has ever seen. Wayne was sporting a blue and turquoise suit and nursed a baby doll as he sang. Just another day at the office.
A Spinal Tap moment came when the gantry descended down towards Wayne’s head just behind him it then spat out colour to the back of the hall. Red Bulls seemed to keep him going as he was emerging from a bout of flu that saw his London gig cancelled. But nothing stops Wayne when he’s on a joyous roll and that’s what the Lips are all about – pure joy.  True to form they come up with a surprise, as their new album The Terror is a frightening series of songs that don’t play many happy cards. Blasts of sound accompanied by explosions of colour and light from the amazing light show attacked your ears and eyes. But there were spells of pure beauty, like ‘Do you realise?’ when bliss returns. They even played Dark Side of the Moon, in tribute to the fact that the Dome was where it was first performed. Stepped out of the Dome into a full moon with two thousand happy souls and felt on top of my own little world.