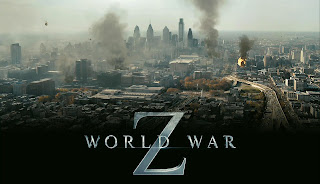 Zombie movies, I love. The Walking Dead, I adored. World War Z was, well OK. It rips along and the zombie apocalypse plague idea is clever but there’s aspects of the film that just jar. First, the scientist’s death, a key plot turn, is simplistic and contrived - he slips on a ramp. bumps his head and dies!? The scene with Israel welcoming Palestinians through their wall, if not unlikely, is certainly contrived (ah – so they built the wall to keep zombies out!). The ‘family’subplot is also overwrought and too sugary for my taste. And whenever I hear the phrase ‘Navy Seals’ I yawn involuntarily – here comes the banal macho dialogue, bandanas and mock heroics.
Sci-fi and horror can explore sophisticated ideas and push the imagination into philosophical realms, relating to the status of our species, cosmological ideas and so on. But this has been through the Hollywood ratings mill (rated 13+)and ends up being an emasculated, tame thriller. Where's the 'horror'? Some of the zombie scenes are terrific but you're never terrified. Like Pacific Rim, it’s another sci-fi movie that fell to earth. Let’s boldly go back to where no man dared to go…. space!