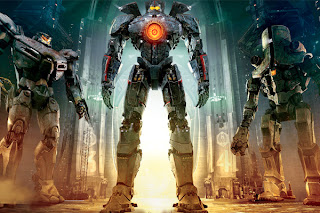 OK, I get it del Toro, it’s a homage to all of those movies you loved as a kid but when the homages have more screen time than the movie you’re making it turn from homage to montage. The endless references to previous movies are too obvious to be smart and too many to be interesting. Bladerunner, Aliens, Star Trek, Godzilla, Iron Man, Transformers, even Chinatown gets a reference.
The neuroscience stuff is also odd, you need two people, as you get nosebleeds if you don’t. What a coincidence, as is is also a chance for father-son, romance etc. It also makes the fight scenes confusing. In any case, the Jaegermeisters are too corny and clichéd to be interesting, so you don’t really care of they live or die and the plotline about big daddy, the red shoe (gettit?) and the Japanese girl was trite. As for the two scientists, they were cartoonish and although the dialogue tried to be smart-ass funny, was well below par. Corny dialogue may have been the aim but it’s not funny over an entire movie. The English scientist was just ANNOYING.


The fight scenes are terrific, but are loosely held together by a shoestring of a plot, corny characters and flimsy dialogue. My ultimate dismay comes from the fact that sci-fi has fallen back to earth, this means that imaginative plots, places and ideas are replaced with fanboy homage, monsters and big toys. For kids who haven’t seen all this stuff, fine. For adults, it’s a waste of talent and budget.