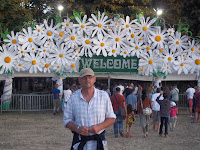 You get a lot of sniping about Latitude from music journalists and others about its middle englishness, as if a Festival ain’t a Festival unless it’s a mad mudfest. I don’t want the dangerous, drunken madness of T in the Park or Reading. Latitude works because it is NOT these Festivals, that’s the whole point. Set around a lake in a beautiful valley, the organisers create a world in which you can easily wander from venue to venue. It’s not crowded, you never see any violence, even angst. Even when it rains, it’s on sand, therefore minimally muddy. It’s calm, chilled and hassle free. What’s not to like? 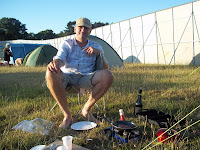 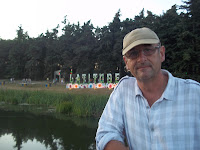 Stuart Maconie
This man can pen a sentence or two, so I toodled along to hear him speak about his new book
He was hugely amusing, as good as a professional stand-up with his journey through British pop-music which, he claims, we Brits invented. From “Bluebirds Over The…” to Bonkers, he takes us through, not the pop-songs he likes, but those that got under the nation’s skin. I liked his point about the nation’s reaction to Thatcher, in London we got Spandau Ballet and ‘Gold’, in the north we got The Smiths. Or his description of Queen as the Matalan Led Zeppelin. Found the £20 book in a small stall in The Woods for a tenner – bought!
Dr Who & The Lattitudes
Nice theatrical skit on Dr Who with suitably near to the bone jokes about paedophilia and BBC Saturday evening shows, and jokes about Latitude. Very funny.
David Trent
Primary school teacher turned comedian, in the Cabaret Tent, gave a show about spontaneity in comedy, where his contrived jokes were the reveal. Novel act that turns the so-called ‘spontaneity of live comedy' on its head, showing it up to be no more that old music-hall gag sets. His spontaneous sex sketch sent mums with children scurrying to the door which has a clear sign saying 15+.
Bobby Womack
Conformation once more that the Main Stage is to be avoided. Getting tired of hearing the word ‘seminal’.
Hookworms
Whole load of young British Psychedelic Rock bands here and I’m rather enjoying them. These guys, however, are a work in progress.
James Yorkston
Scottish crooner who delivered a lovely set of songs in the dappled woods. We sat on a log with a pint of cider and all was well with the world.
The Great Tax Robbery
Poor debate by a Private Eye journalist and ex-VAT inspector about our failure to sole this obvious problem. They were keen to blame the robber capitalists, but the’ incompetence  and no longer fit for purpose’ state of the HMRC was evident. I asked a question to try and enliven the debate “Do you think that tax evasion has infected Middle England, with tens of thousands of teachers tutoring for cash, paying builders in cash and putting spouses on the books of small businesses?” In other words, the people in this tent have long broken the laws on tax, we’ve just grown used to it and that’s why the politicians are so laissez faire about the whole thing. Bullshit replies about how it’s all about context. Minutes earlier they had all agreed it was a serious matter of morals and principle. Oh well.
Temples
Another psychedelic rock band and well worth the walk to the woods.
James Blake
Fantastic set in the early evening sunshine.
Eddie Izzard
Getting a bit formulaic is old Eddie, although he may well be focussing less on laughs and more on the Mayoral election. He could just edge it. Still funny as fuck though.
Rudimental
My son recommended this and it was MENTAL. Big Tent wet bonkers with a mixture of R&B and club music that’s just great fun. Now if you get me dancing, you know that its music gold!
Disclosure
Hung around for another recommendation from my son, and as I had on my dancing feet, absolutely loved the White Light/White Noise beats of these brothers ( a lot of brothers on stages this year).
The Foals
Not a great fan but went up to see the final half hour of their set and was impressed. Great way to end three days of unadulterated fun and escapism. See you all next year.