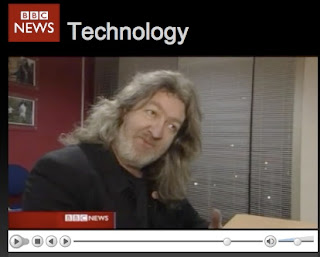 Strictly Come Digital
Strange start from the Creative Brighton rep, a hesitant woman in a weirdly inappropriate Strictly Come Dancing dress, sequins and all, introduced our not so illustrious panel with some flannel about digital zeitgeist.

In the newspaper corner, no Emily Bell as billed, in her place Neil Mackintosh, a Guardian journalist – never heard of him. In the music industry corner, Beth Appleton, someone who works in Universal Music. In the TV corner, Matt Locke, who works for the education (really) department of C4! At least we had Bill Thompson, a cute commentator on technology, albeit in the pay of the BBC.

I may have missed something but since when did British newspapers, the education department of a British TV channel and the music industry ever represent the digital future? And why pick three unknown London-based people who work in big non-internet companies to represent the digital future? Why no one from an internet company? TV, the music industry and newspaper s are followers, not leaders. They have not been innovators in this field. They play catch-up.

Death by Powerpoint
This was meant to be a debate on ‘digital creativity’ but what we started with astounded more than a few in the audience – a Powerpoint presentation! Sorry, a bad Powerpoint presentation. Beth, the music guru, presented a series of text rich slides, breaking every rule in creative design, then proceeded to read them out one by one. It was awful.

She was basically an apologist for Universal trying to defend some huge music company, when we all know that they want to kick the hell out of file sharing and hate the web. Just for the record this is the same Universal that hunted Napster down like a dog with massive lawsuits, and even this year have sued MySpace, Yahoo and threatened Microsoft and Apple over pricing. They’re a bunch of bullies. Neil Mackintosh wasn’t much better with some nonsense about journalists hoarding stuff.

Public/private/play
Matt Locke was much better. He wisely chose to avoid talking too much about the C4 education unit whose contribution to our digital future has been NIL. He did mention Clay Shirky (who was mentioned so often, he felt like the fourth member of the panel - http://www.shirky.com/), and made a useful point about the blurring of the private/public boundary. Mobiles and ATMs have made things public that used to be private. Even public phones used to be in soundproof red boxes. Another strong observation was on the rise of ‘play’ in leisure, learning and work.

Bill nails them
Bill then nailed them by saying they could be a blacksmith, apothecary and some other old profession. It was like people defending the use of horses in the face of the car industry, he claimed. He was right, and their contributions from then on only confirmed his observation.

Beth’s contributions became increasingly banal, especially her comment on the Licence Fee - a futuristic business model, she claimed - really a subscription. Sorry Beth, subscriptions are not compulsory by law!

In the end I would have preferred to hear Bill speak, rather than Chair. As Chair he said more than the rest of the panel put together. All in all, an opportunity missed!

I don't think I've ever been called 'cute' on a blog before.. many other things!

I'm sorry you were disappointed by the debate - any panel is going to reflect only a small bit of the picture, but I do believe that there are going to be more events which will tap into Brighton-based entrepreneurs, which may offer a different perspective.

Maybe see you next time I'm in Brighton and we can continue the discussion.

Hi Bill (sorry cutie!)- it was worth going for your witty observations alone. A key word 'entrepreneur' as the web has grown on the back of real entrepreneurial spirit and innovation - Wales, Anderson, Page, Brin, Torvalds, Bezos etc. You did your best with some rather dull middle managers. Sorry to be so harsh, but I did pay and it was billed as a debate. Two of the participants were just amateurs. The C4 guy was OK, but is one of a small army of people faffing about spending public money to no real effect.