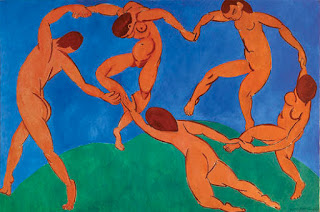 Off to a bad start as the Rejin picture of the October 1905 celebration is so poorly hung and lit that, no matter where you stand, it can’t be seen in its entirety. Two spotlighhts drill into the painting flooding it with white light. Why spend so much on getting this stuff to the then kill it with poor curation? While I'm at it, 30 minutes in the queue as there was only one person selling tickets at three tills – who runs these places?

Repin’s Tolstoy is a familiar image, seen on the covers of countless paperbacks then the Nesterovs and Levetins – Russia’s landscapes are not abstract experiments in colour, they are places populated by people. Even when there’s no one in the landscape – it’s their presence that counts. Nothing really knowcks you out here and the endless speculation on colector's is ratehr tedious - catalogue stuff. I'm here for the painting, not the history of collecting.

The huge room of Impressionists and Post-Impressionists - Monet, Renoir, Cézanne, van Gogh, Gauguin, Matisse and Picasso – is a spectacle. The Haystacks, Poppy fields and Renoir bar scenes are all too familiar, but Matisse’s ‘The Dance’ is one huge piece of joy that dwarfs everything else in the room. It was a Russian magnate that commissioned the piece for his house and I wonder if the current crop, Abaramovich etc show as much taste and vision – doubt it. You may have been delighted by Dance 1 in the MOMA in , but that was a mere study – this is the masterpiece. But it’s his other huge canvas, a sizzling, deep-red image The Red Room is just as impressive.
But it’s the Russi 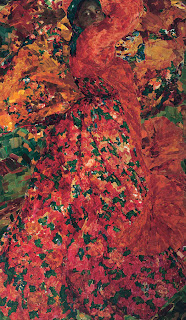 an artists I really came to see; Alexander Benois. Leon Bakst, Boris Kustodiev, Nochiolas Roerich, Alexander Golovin and Valentin Serov. And there it was, a complete surprise. I have never seen this picture, nor any replication in print, yet for me it was the star of the show. Tucked away to one side was a huge image of a woman dancing in a red/green dress, as rich as any Byzantine mosaic I’ve even seen (seemed to be its inspiration), and as lively as any painting I’ve ever seen. This is Malyavin's Peasant Woman Dancing. He went to Mount Athos when he was 16 and became an icon painter, eventually reaching Russia, then Paris, to become an acclaimed painter. This, for me, is the real link between France and Paris. A painter whose roots are truly Russian/Byzantine, taking his art to new heights through colour to portary the new Russia, that of it's pesants. 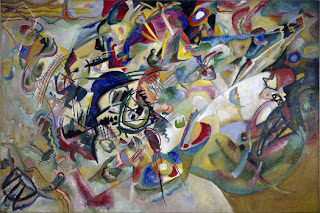 om was as dull as old museum showing some minor artefacts from the past, but moving quickly into the last room, the finale, raised my mood again. A wonderful wall of Kandisnsky, some Malevich and the abrupt minimalism that ended in the images of the cross, 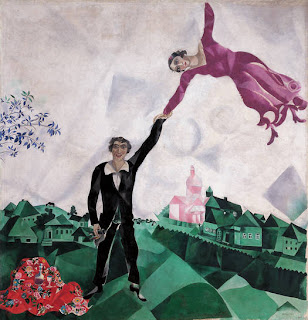 Funny. I wrote a post about this exhibition - I went to see it just over a week ago. I, too, was blown away by Malyavin's painting, and it is the centre piece of my post. Do have a look: