As Europe split cleanly into the Reformed north and Catholic south art was similarly separated in terms of funding and content. Hans Memling, Pieter Bruegel the Elder, Jan Brueghel, Van Dyck and Rubens are all here and the Van Dyke/Rubens connection (one VD the pupil) is well illustrated.

Quinten Massys’ portrait of Erasmus, painted as a gift for Sir Thomas More, is precise and scholarly, a reformation image. Meanwhile, in the south there was a rash of ‘encyclopaedic’ paintings.

Frans Francken’s Cabinet of a Collector, shows a man's obsessions as a collector. His coins, shells, fossils, books, paintings and miscellaneous bits and bobs are stuffed into the frame, but at bthe side some dark figures in donkey heads are destroying art works. This was a jibe towards the reformed north. Nice to see that a 16th century man's private room looks the same as my own! I bought the postcard, which is now in that same room.

oy at a Window (unidentified artist), is a curios piece with a lad tapping at the glass window with the tip of his finger. It's a fun image and free from any of the religious import which shape most of the other images in the exhibition.

Pieter Bruegel the Elder’s Massacre of the Innocents is the centrepiece of the show. The snow acts as a clean, white backdrop for abloody massacre. The killing was neutred at a later date, the massacred children replaced by animals, but look car 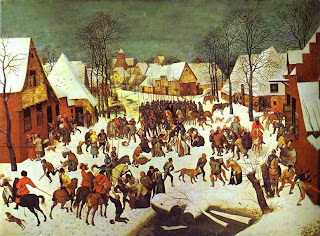 efully and you can see the overpainting. It would have been great to have seen an x-ray image showing the 'before' to this 'after'.

I made the misatke of taking the audio commentary. While it did a good job on the massacre painiting, the rest was like an undergraduate essay.