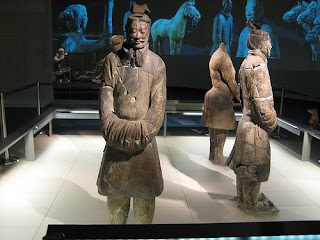 Huge queues and show is crammed into the reading room - the bottom line is that the British Museum is not set up to cope with these blockbusters. It was far too hot and crowded. These acrobats were unusual - buried in a separate pit they include a strongman (at back right).

I'm off to Xian in a couple of weeks but was keen to see a preview of the warriors before seeing the real site. What we see here are mere samples from the site but the figures are impressive. There's a mass manufacture feel (something Chinese aesthetics has ever been scared of) but the joy is in the faces and hairstyles. Compared to similar Greek sculpture in the west at the time, it's primitive but this was not 'art' in that sense. It was a act of Emperor/God megalomania, closer to Pharonic Egyptian burials.

Legalism
What was in 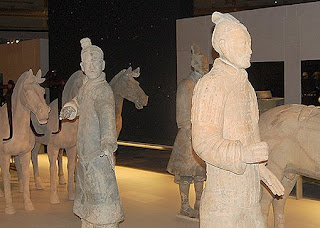 teresting wasn't the art, but the cultural impact. The creation of a superstate, first through an overwhelming investment in the military machine, with standardised weapons and conscription, then protection of its borders (The Great Wall - really not a wall at all but several walls) . What held the whole thing together was the philosphical idea of legalism - we're all born bad and have to be constrained by laws. This led, conceptually, to not only laws but standards in coinage, weights and language. It would appear that these have been China's strengths and weaknesses for 200 years. 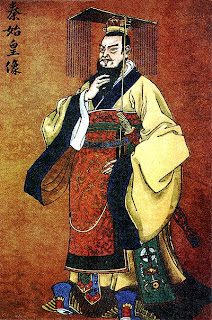 The next show at the British museum is Hadrian (76-138). The parallels between Hadrian and Quin Shi Huangdi are striking. Both were formaidable military leaders who built great walls to protect their empires, toured tirelessly and built on scale. Tivoli Gardens are similar to the great Qui Shi's gardens built by reflecting his conquered territory.