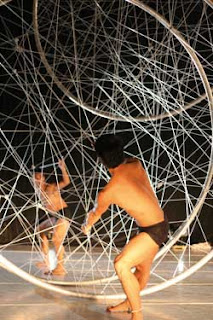 Everything changes - that was Ovid's message and this performance changed from a rather dull start through a series of myths, some stunning, some obscure, others just banal. However, it did grow in stature as it progressed, albeit in a totally disjointed fashion.

The set and discs were OK, but more could have been made of them, rather than just the occasional spin or screen for projection. At points their use seemed confused. Much is made of the Brazilian designers but it was nothing EXTRAordinary. In fact, the projected images of bacteria and DNA were trite and the plastic pupae that cracked as ice was laughable.

The Chaos myth was a simple piece in subdued lighting as bodies struggled to gain form and movement, they emerged, paired, grouped and synchronised. We got the point but it was a little laboured (don't say that was the point).

Spot the myth
The problem with this theme is that it invites you to guess the myth from whatever bank of myths you've picked up over the years. So here goes. Perseus and Medusa was the piece that really did bring the lighting, set, costumes and choreography together into a stunning whole. The careful manipulation of the mirrored shield across that audience elivened the whole dance and Medusa's dance was suitably strange and alien. Acteon surprising Diana belittled rather than enhanced the myth. Acteon comes across Diana, surrounded by nymphs, she turns him into a stag and he is torn to pieces by hounds. This is a great, tragic tale, delivered in this performance by placing a mess of white tubing round his head. A good use of choreography and video in the Narcissus scene which lingers, as it should and the mirrored dancers were perfectly synched. A circular rig and web acted as Pallas and Arachne's trap. It was OK....but not thrilling. I wasn't sure, but I think the last scene was Medea and, if it was meant, the nakedness of her young body contrasting with the aged appearance of her ribs was very strange, and made for quite a disturbing end.

Second best?
This is the third Ballet de Marseille performance I've seen, and I'm not convinced they are as groudbreaking as their publicity suggests. If this is the 'second-best dance company in France', then all the noise about the decline of French culture must surely be right. There's nothing here that makes you take notice or brings on a surge of emotion. The audience, of course, loved it, but then again they love everything in the venue. Everyone I've spoken to afterwards sort of shrugged their shoulders.