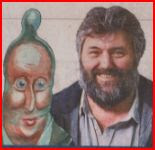 Steve Bell lives about 200 yards from my front door so it was a little odd having to go all the way to Edinburgh to see him. However, it was a full house for Britain’s best loved cartoonist (at least for the left-leaning), who delivered a stonking show narrating the story behind the creation of his best known characters; Thatcher (plain mad), Major (underpant ordinariness), Blair (Thatcher in disguise), Bush (chimp), Charles Kennedy (angry eyes), Ming Campbell (geriatric), Gordon Brown (chin laden), Cameron (young, gifted and plump), Ed Miliband (strange, stary eyes) and Murdoch (mad).

He swore like a trooper throughout, describing Margaret Thatcher as “completely fucking mad” and Murdoch as a “mad old fucker”. But what was fascinating was the methodical observation and sketching of the characters before settling on the caricature. You imagine him sitting at home, pen in hand, but no, he attends Party Conferences, sketches and takes photographs, even scanning cartoons in on his laptop for submission the editor.

Cameron approached him recently, and said, “Hi Steve. What’s this condom thing all about?” What he thought but didn't say was, “because you’re a dick”.