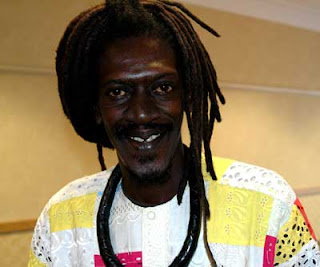 James Brown RIP, as in let's RIP. A surge of feeling from somewhere in your feet rises up until the hairs stand up on the back of your neck when you hear the opening bars of ‘It’s so good’ and ‘It’s a man’s world’.

Cheikh Lô seemed stoned out of his head and couldn’t find either his microphone or lyrics and it was hilarious watching him wander about looking, first for his guitar, then the lyric sheet. At one point Pee Wee Ellis had to talk the lyrics into his ear line by line. Once he got going, however, he was roof raising.

The two guest singers let rip and danced as well as they sang. I’ve never seen anyone dance as well as James Brown in stilettos!

The deep African backbeat engine of the double drummers and base drove the music from the back, with percussion, organ, guitar and horns up front. It just bulldozed along, sweeping everyone in the audience along in its shovel.