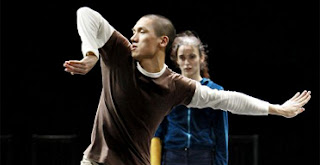 Marc Auge, the French anthropologist, calls railway stations, airports and other transitory spaces ‘Non-Places’ and it was clever to set the entire piece in an anonymous international waiting area. The digital departure board was also clever, although underused, and at times abused. ‘Earth, Air, Fire and Water’ must literally be the oldest cliché in western literature and the final HOPE/HOME/HOPE was puerile. We half expected to see ‘’. It would have been great to use this as a medium for more SMS messages.

The dialogue (really chatter) was not miked, therefore difficult to hear, and although witty at times, went on a bit. On the other had the dancers were superb, especially the four from the National Ballet of and, in particular, the tall Chinese male in the white shirt. Dance is in the DNA of Chinese culture. Step outdoors on any morning at first light and you’ll see hundreds dance in local parks, all of it graceful. His moves were full of beautiful Chinese touches, ‘wushu’ and ‘Tai Chi’. He’s a real star.