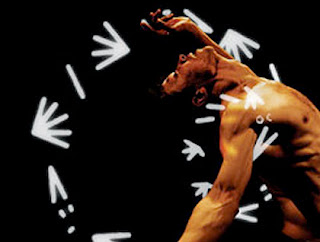 Go see this
The ‘must see’ show of the Festival so far. I had never heard of Norman McLaren but I doubt I’ll ever forget him after this experience. It’s ingenuous and utterly fantastic to watch a single dancer play with film images projected behind, in front, above, below and around him. I’ve see this technique used before but never in such depth and with such imagination and beauty. It’s usually a projection ‘gimmick’.

McLaren’s films were about unadorned form and movement and he likened his films to dance. Trosztmer and his projection wizards Lemieux and Pilon fuse these films, along with physical props, interviews with McLaren’s colleagues and dance. It’s downright genius.

McLaren
What a fascinating person McLaren was. That rare bird, a Scottish artist, he studied at Glasgow School of Art, but because he didn’t have a film camera, he scratched images straight on to the film stock! Remember that this was between the wars. He was really a visionary and visual poet.

'A Chairy Tale', where Trosztmer does an astonishing chair swap with the virtual figure and chair, was an extremely sophisticated piece of choreography. 'Narcissus' where figures split, observe each other did more in a few seconds than the entire Ballet de Marseilles ‘Metamorphosis’ achieved over an entire performance a few nights earlier. 'Begone Dull Care ' was a visual representation of Oscar Peterson’s Jazz. 'Pas de deux' uses real ballet figures and this figurative work allowed Trosztmer to literally dance with ballet dancers who are now probably dead. 'Neighbours' is a shocking anti-war film that starts with two neighbours coveting a flower. It descends into a brutal fight where babies are kicked into touch and the men batter each other in a futile domestic war. The treatment of McLaren’s death was powerful and genuinely moving. There seemed to be literally dozens of films and the treatments for each were specific and transformative. Trosztmer in every case made the piece his own by creating something new from the old.

Sych
It’s the synchronisation of all the elements that at first impresses, then amazes and finally moves. Trosztmer kicks, punches, plays, bounces off and inhabits the simple projected forms. Projected figures appear, sit beside him, talk to him and dance with him. At one point he opens a door and a 3D wire frame emerges, then the white blur of a runner followed by small dancing figures and some languid cats that pad across the stage.

A word in praise of the Theatre Royal
I liked the intimacy of the venue. The Theatre Royal is a small, tight space and this close proximity to these amazing films and the dancer made the whole experience more intense. It was great to emerge on a warm evening into , where we sat and had a late night drink, and spoke to a visiting Welsh couple who thought was wonderful.