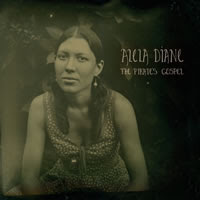 And we're off.....first event in the 2008 Brighton Festival. The children's parade seemed like the biggest and noisiest yet. Parades need to be noisy as there's nothing worse than one of those quiet, joyless, glum, silent 'British' affairs.

The streets around the venues were packed and Fringe acts were out giving it their all; the good, the bad and the downright crap. The live burlesque made my teenage sons stop for longer than was necessary and the grand finale, a parting of the feathers, lived up to expectations. The great thing about burlesque is that it attracts women with 'interesting' rather than perfect bodies.

Alela Diane, from Nevada City in northern California, is a US folk singer with a big voice and a sackful of strong songs. Not all the songs hit the mark but the first had wonderfully ambiguous lyrics. Tired Feet, White as Diamonds and Clickety Click were good but her most famous song, The Rifle, shot straight and true.

The sun was out, an auspicious start for sunny Brighton and the Festival- lets hope it continues.