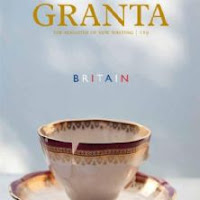 I had to check my ticket at the end, as this wasn’t a debate about Britain at all, merely a meandering, second-rate, self-obsessed, after dinner, sound off about the SE of England by London’s literati. The chair, Granta’s deputy editor, started by reading out two solid pages of word-processed text as an introduction, so it was clear from the start that there was no theme or spontaneous insights, and that the debate would wander.

Adam Foulds read from his Granta piece, about deep-sea diving and casual drug use. I could not for the life of me see its relevance to the debate. All was revealed – he had submitted the piece for another Granta edition and it had been shoe-horned into this one! At least he was honest about its irrelevance. I should add that we all received a free copy of the current edition of Granta, dedicated to this theme. Having now waded through this, and heard Foulds explanation, I understand why it was free. It’s mostly fag-end pieces and bottom drawer detritus.
Safraz Manzoor was a boor. His only real offer was personal anecdotes about his life in Luton and some petty barbs about his old school. The school had asked him back to speak and all he could do was ridicule them for ‘having an exchange system with other Luton schools’. This is not in fact true. The Schools Linking Project, is a successful low budget initiative targeted at dispelling suspicion between communities in the UK. He confused 'exchange' with attempts to create rounded individuals, with some good old social interaction. It was spiteful and unnecessary. He then had a go at his old school having the ‘performing arts’ as a specialist subject. He was so full of himself that he failed to see the contradiction – they had also invited him in to speak.
The one bright spot was Polly Toynbee, whose book The Verdict, is actually about Britain and does make judgements on what was great or not about Labour’s period in power. Her reading nailed Major’s characterisation of Britain as ‘cricket and warm beer’ confusing England with Britain, Blair’s Cool Britannia as desperate and Brown’s ‘oath to be recited at schools as ‘jingoistic and banal’. She desperately tried to get the debate back on track and rightly hammered Safraz Manzoor’s petty, Daily Mail observations on rewards (everyone earns too much) and schools (gone to rot).
My question was “We have failed to get further north than Luton in the debate and all of the references have been to England. Are we really talking about England here, and will there, perhaps, be no Britain in two years time? (reference to Scottish referendum). Manzoor, said, “I don’t want to sound flippant here” then proceeded to be flippant. “We’re not taking the theme too seriously, it’s just an idea to chat around”. OK, then why on earth would I pay £10 to hear you chat away on what ever comes into your head, especially when those thoughts are so banal? We ended up. Predictably talking about London and the EDL. What’s does the ‘E’ stand for – not Britain.