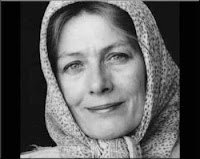 Vanessa stepped slowly across the stage, tall, dressed in grey and white, like a huge stork, to rapturous applause from the audience. At 75, she looks great and gave us the sort of honest look at how acting and the movies work that you rarely get from today’s narcissistic celebrities. She’s far too old and wise for that game and has absolutely nothing to prove. As the greatest English actress of her generation (not just me who says this but Arthur Miller and Tennessee Williams), she was full of insights.
Michale Billington interviewed her well, with a gentle hand on the rudder keeping the boat flowing in the right direction, never detracting from the star of the show - Vanessa. She talked of submission to the Director and not getting too creative as an actress. Full of admiration for the many Directors’s she had worked with, she emphasized their intelligence and vision. Acting, she said, was like picking a lock, as she extended her pinkie forward, curled it up a little and turned. You had to get inside the hidden box and unpick the character. She talked of the war and of the artist Kokoshka, who taught her to ‘see’. With over 60 movies to pick from we saw some great scenes from Morgan, Blow Up, Isadora, The Bostonians, Julia, Venus and Coriolanus. We saw that same beautiful face, not the classic Hollywood beauty, but an interested, interesting face with inquisitive and intelligent eyes. Although this took place in a huge Concert Hall, and not a cinema, in just a few seconds you were in the scene. You can’t keep your eyes off her face.
Of course, it wouldn’t have been a night with Vanessa, if politics did not make a guest appearance, and it did. She has always been a passionate (and I use that word seriously) supporter of specific causes, especially the Palestinians, and been on the receiving end of some vicious verbal assaults by US Jewish lobbies, who see her as a supporter of terrorism. But has held firm for all those years and continues to fight for this cause. Although she’s no left wing lackey and when someone asked her if she “had something to say to Obama and the US people about war and Guantanamo Bay” she simply said “no”. There was a final insensitive question from someone in the audience asking about her favourite performance by her ‘siblings’. I don’t need to explain why it was insensitive. What was the questioner thinking?
Fantastic evening. Well done Vanessa.