Gabrielle Walker: Antarctica - Dark side of the white continent 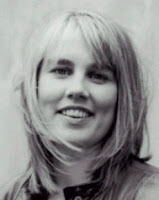 There really is a 'pole' at the South Pole, it's striped like a barber's shop pole, and I wish I had the startling image Walker took of her friend doing a handstand on the pole, so that, when inverted, he appeared to be holding the entire planet up on a lollipop stick!
The North Pole’s an ocean surrounded by land, the South Pole a continent the size of Europe surrounded by vast oceans. It’s remote, uninhabitable but sublimely beautiful. Walker showed us how she had breathed 1 million year old air from the released bubbles in old ice, experienced a true whiteout where all contrast disappeared and brought the whole place to life with several well-chosen anecdotes.
But her Antarctica has an underbelly, vast lakes of water between the rock and 2 mile thick ice sheet, that the Russian’s have just broken into. There was a fear that the gunk they used in the drill hole would contaminate the lake but it’s under pressure, so it pushed said gunk back up the hole where it lies frozen, to be removed when they return. What will they find there? Probably some weird life forms, she thinks.
The black message from the white continent is the breakup of the ice shelf and the fact that the melted ice, in the form of rising sea-levels, is heading towards, London, Florida and elsewhere. I can’t help be struck by the failure of science to get its message across here. There’s no Richard Dawkins or Stephen Hawkins in the field. Gabrielle is charming but she’s more journalist than heavyweight scientist. We need a big hitter.
She was also a bit sycophantic about Antarctic explorers. Roland Huntford’s biography of Scott, showed him as a poor planner, poor leader, arrogant, aloof, inflexible, not knowledgeable about dogs and sled transport and so on. Walker defends him on the basis of his dedication to science, but collecting 35 lbs of rocks, and loading them onto sleds when your comrades were dying, strikes me as neither heroism nor a devotion to science, just recklessness. She’s promulgating that British tradition of confusing heroism with amateurism.
Walker also hinted at the dark side of Antarctica, and I’m sure there’s a good book to be written here. You may think that this is all about science but the huge research budgets are fuelled, not just by science, but by territorial presence. It’s no accident that the US has its research station bang on the South Pole, probably the worst position for research but handy for having a finger in every piece of the geographical pie.
There were some great questions from the audience on the evolution of penguins, Martian meteorites and the failure of getting the climate change message across. This was an hour well spent but I still don't know when London will be flooded by rising seawater - and there's the rub.