http://www.blogger.com/template-edit.g?blogID=27684744 ARTYFACTS: The Lure of the East – Tate Britain

The Lure of the East – Tate Britain 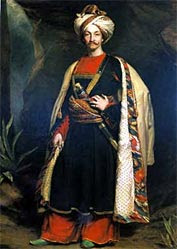 This show of British Orientalist Painting is short on masterpieces and rather long on low quality Pre-Raphaelites, but it’s a great way to spend an hour or so, especially if you’ve traveled to or the .

Portraits open the show and they’re mostly staged pieces, all about the silk and damask clothes. We are ‘orientalists’! Even Byron, who did swim the but never got further than , dons his silks. Captain Colin Mackenzie has an interesting back story. He was captured in the 1838-42 Afghan War, when 16,00 British troops, civilians ad associates were massacred. There’s a great book on the subject – Signal Catastrophe. David Wilkie and David Roberts were two Scots made good, both with a talent ad a sense of adventure. Their portra

its and landscapes remain a fantastic record of the and the . But it’s the small portrait of Napoleon against a Cairene background that steals the limelight in this first room.

The ‘Genre and gender’ section is a bit forced, but makes the point about Harems, excusing them on the grounds that they were spaces where women could hang out – oh yeah! This should have bee combined with the later Harem section.

The has a superb oil by Gustav Bauernfeind called Entrance to the , with a party of Jews being refused entry, the tragedy continues to this day. In general, British artists seemed more at ease in painting landscapes and interiors. The people are mostly incidental or in stereotypical poses.

I did enjoy the darkened room, computer animated timeline ad presentation of photographs. , and are fabulous cities – I’ve been to all three and will certainly be back. It was quite a shock to step back out into a rather grey sky after all that painted sun and colour.