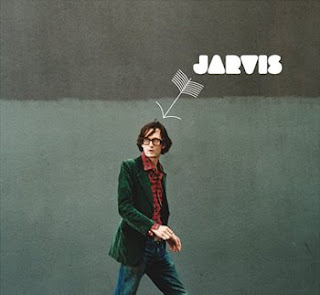 This is what Festivals are all about. A creative person, in this case that most English of pop stars, doing something different, and an audience that is open enough to stick with it. Jarvis Cocker delivering a PowerPoint on song-writing sounds odd, and it was. He was very nervous, and admitted as much at the end, but he's a fascinating character and delivered his 'lecture' with healthy doses of humour.

He started with a proposition, that lyrics are inseparably bound up with the music, and that they don't really matter on their own. Louie Louie by The Kingsmen was played and the old urban myth about its filthy lyrics was rolled out, along with the FBI investigation. The whole thing, as he explained, was a wind-up - the lyrics are as innocent as a nursery rhyme. Other examples were the magnificent 'I am the Walrus', Scott Walker's 'Plastic Palace People' and lots more. The highlight was Cocker's own acoustic performance and his own thoughts on his own lyrics, for example, 'Girls Like It Too' which should appear on his new album. He is a brilliant lyricist - just listen to Common people and Disco 2000. It was meant to last 1 hour and 15 minutes, but ended up at a whopping 2 hours.

Brighton baloney
The questions at the end were a real bag of 'Brighton' baloney. First the long-winded wannabee who asked two rather overlong questions, then added, 'I thrust my CD into your hand earlier', at this point the audience rightly booed. A disgruntled band member/song-writer who wanted to know how to split royalties (Cocker split the 4 ways in Pulp), the wacky therapist who wondered why Cocker hadn't tackled the serious issue of song-writing as therapy! Is nothing sacred? Does this 'Therapy Culture' have to infect everything? Then the sycophant. In the end these crackpots couldn't spoil a fantastic pulp, pop, powerpoint night.