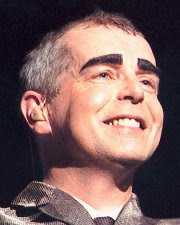 Tennant is an articulate, witty and sometimes smug commentator on his own art form – pop. But we forgive his aloofness because he wrote great pop songs and doesn’t seem to be part of the publicity-seeking, pop pack. The truth is, he’s every inch the pop idol and pop bitch. He collaborated with Liza Minelli for god’s sake! But it’s this mix of honesty and front that makes him likeable. I hope for more of this from Jarvis Cocker and Mark E Smith.

Tennant’s from and Lowe from (the best pop music comes from the North). Tennant explained how the very different Northeast and Northwest expectations came together in The Pet Shop Boys (a name that popped up by accident as Lowe had two friends who worked in a pet shop). His stories about his refusal to wear brown paper bags over their heads on children’s TV, and refusing to wave on the revolving stage at the London Palladium, were priceless.

Strange Q&A session where one girl pleaded for his autograph, another man ran up the aisle to shake his hand, and others wanted to know about other collaborations with ‘women of a certain age’ (Tennant’s phrase).

He’s very theatrical, now playing a sort of Noel Coward, Oscar Wilde role in pop. Unfortunately, it’s a fickle trade, and he no longer registers waves on the puddle of pop. Sad to hear he’s now reduced to doing a ballet at Saddlers Wells. Fascinating evening.