http://www.blogger.com/template-edit.g?blogID=27684744 ARTYFACTS: Gormley truns you inside out - Hayward

Gormley truns you inside out - Hayward 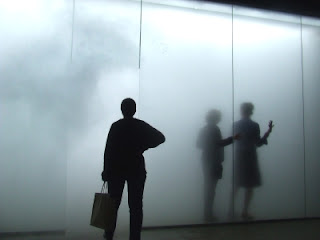 Blind light
This whole show turns you inside out but the core experience is Blind Light, the cloud room. You queue around the outside and can see people emerge from the mist when they reach the outer glass wall. When you enter the disorientation is immediate. There is nothing but white light, your only anchor, the feeling of your feet on the wet floor. As you walk, others loom in and out of view.

Being lost inside a room is novel, especially when you know there are plenty of others in the same room that you can't see. You quickly lose all sense of direction and distance as there's no visual cues by which you make these judgements. It's very isolating. You literally wander lonely as a cloud, within a cloud. On deciding to exit I found the glass wall but found that my sense of where the exit was has all but disappeared. 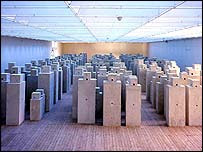 Allotment II
These human sized boxes, were built around the dimensions of 300 real people, one cuboid for the body, another for the head. It's a maze of people but you can't see them. They're all crammed in but missing. This is about exclusion from communication.

This stuff seems to be about the issue of solipsism. We are ultimately blind bodies with consciousnesses that reflect the physicality of our bodies. We feel ourselves as being our body but only see others as bodies. Our consciousness re-presents people first through our image of them as figures. Bright Light takes us into our consciousness by stripping away most sensory input, or by reducing it to one colour. Then, from the outside we see others struggle with that same experience.

Matrices and expansions
It's wrong to think of Gormley as making statues or figures. He is as much interested in their absence as presence. What he does is explore our consciousness of ourselves and others. here the figures are only there by virtue of their surrounding matrices. Some are obvious, others emerge as you walk away from them. The mind is finely tuned to select contour, especially that of the human figure. So we can pick out the shapes within a mess of metal rods. These are anti-statues - spaces not solid forms, but empty spaces seen through other empty spaces. Yet these are people, nonetheless. It's a play with perception. From the slightest of visual cues, we can see the human form.

The fact that they are tightly packed into one room means that you can walk round them but you're constantly in danger of bumping into them, turning and avoiding the collisions. When we walk down a busy street it's a miracle of perception and consciousness that we don't bump into people. We dodge, weave, turn, look and navigate like grand prix drivers. This room gives you an insight into that ability.

Event horizon
Go outside on to the three terraces and the same theme is explored on a massive scale. Your eye starts to see figures on nearby rooftops, then one on the street, then several hundred yards away on top of a building, then even further and fuether across the Thames and then so far in the distance that you're not sure that it's even a human figure - but it is. Astonishing. We see people at huge distances because our cognitive abilities have been selected to do so.

On the other had it's about limits, hence the title. How far can we see before things become difficult and then impossible to see? Are there figures I've missed? London, at least as far as one can see from the Hayward's three terraces is suddenly in the frame of a human scale. They all point towards you, making you the perceptual reference. They are seen by you.

Space Station
I was less taken by this huge meccanno-like structure. It has no human dimensions, until you see it from a distance - it's a foetus, that most delicate and rounded of things, but all cuboids. 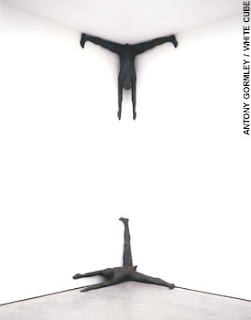 Drawn
A room with figures at each vertice, splayed in three directions. This could have been a great architectural theme if done on the outside of a real building. Within a small room it puts eight figures at the eight corner extremities, leaving the middle empty but the place seems claustrophobic and full. they crowd in on you as you see them as fleeing from you. The fact that they are in disorientating positions relative to each other makes it more intense. This has a far more emotional feel than the other exhibits.

Hatch
A room with internal spikes continues the exploration of claustrophobia, although the release is viewing the outside through tubes that extend to the wall. This, again, is about you, the viewer. In this age of user-generated content and user-control, it emphasises not the artwork but the viewer.

Sense
Wax is melted out from within a cube of concrete leaving a body-shaped void. This is a Whiteread within a Whiteread. You can only sense what's inside from the three holes for hands and head.

GO SEE THIS - THE EXHIBITION OF THE YEAR, SO FAR, FOR ME.