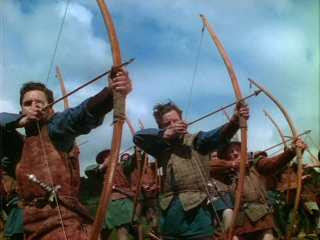 Gallop along
Despite the muddy soundtrack, Laurence Olivier looked great as he took our 'boys' to France, riddled the foppish French with arrows and wooed the French maiden. Shakespeare has hugely shaped our image of the monarchy and in this play Shakespeare sees Henry V as an ideal ruler, mixing with the common folk, an absolute and benevolent ruler. This is why Henry V is not nearly as good a play as Richard III (Olivier was to do this in a far better film some years later). The Globe Theatre scenes are my favourite, realistically showing Elizabethan Theatre with its open roof, rowdy audience, promter and strange stage structure. The film rollocks through a pre-determined narrative, avoiding any convincing nuance. However, you can just sit back on your horse and gallop along with the story.

Lines overwhelmed
The orchestra was fine, but ultimately a soundtrack needs to be synched with the film, and in this case, all too often, key lines were overwhelmed by the orchestra, something never intended by Walton. The fanfares worked well and Walton's mixture of choral and orchestra pieces is fine. In the end I'm not convinced that the huge expense of a full orchestra and choristers was worth it. The film is a fascinating piece of 'Shakespeare on film' and an important film in terms of its second world war propoganda context, but the soundtrack is no masterpeiece and doesn't stand up on its own. I much preferred Run Lola Run, where the chosen film could take this treatment.