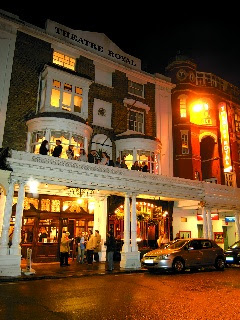 I had jury service but the wheels of justice came completely off, so our jury was sent home. As I had time to kill, I popped in to see an excellent little exhibition in the Brighton Museum. It celebrates the 200th anniversary of the Theatre Royal, with photographs, posters, models and maps spanning the 200 years.

Regency Theatre
The Regency Theatre was, apparently a 'rowdy, smelly, chaotic affair' performed with the house-lights up and with people crammed onto benches. I like the idea of rowdiness at the theatre. Everything's so staid and reverential these days. It was all much more daring and adventurous with companies coming down by train with their costumes and set in the morning, performing a matinee, then jumping back on the train to London for an evening performance.

Filmed interviews
These were nicely done with theatre managers and staff telling us about the place and its character.

Special effects
I was almost alone in the exhibition so decided to give the several special effects machines a whirl. There was a wind machine, thunder box with rolling cannon ball, rain machine and gravel box. Amazing sounds emerged and shockingly high volume. Great fun.

I see the Theatre Royal in an entirely different light after this visit. Rerally worth an hour's visit.