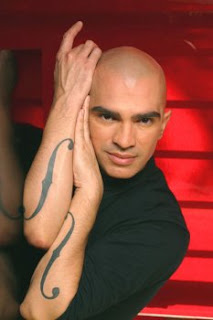 Unique
We had the best seats in the house, middle-seats front-row, four or five feet from Edson. Edson is a small guy with a BIG voice. His body is his second instrument. He cuts all sorts of shapes before during and after every song, head held aloft, arms writhing, hips thrusting. This is a real ‘PERFORMANCE’. I’ve never seen a singer like him – a sort of clone between a camp Prince (Kiss was one of his songs) and Amalia Rodrigues. The Brighton Festival website put it another way, “Imagine Freddie Mercury cross-pollinated with Maria Callas and filtered through the rebel spirit of Janis Joplin. With a four octave countertenor that makes Jeff Buckley seem positively prosaic and a gloriously camp pop aesthetic to put Rufus Wainwright in the shade, Edson Cordeiro is a music phenomenon!” Nice description, but in fact he's just Edson Cordiero - a one-off.

Electrifying
He absolutely electrified the audience with opera, blues, Brazilian music and pop. We had The Magic Flute and something fromPurcell's "King Arthur". The small Pavilion Theatre was in rapture and erupted with applause after every song. The standing ovation at the end was well deserved. This is what Festivals are about – being hit with an unexpectedly new and thrilling experience. Stop what you’re doing – get online and buy a ticket – there’s still some available for Wednesday – I know as I asked the pianist while he was having a quick fag (stop it!) outside of the theatre.

Couldn't agree more with the bloggers review. Seeing Edson in a performance is an experience like no other. A comment on one website describes his voice as the '8th wonder of the world'. I think I agree. His range is 4 octaves!! I'm going again.