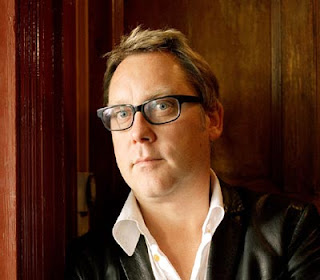 Reeves really did change TV comedy with Vic Reeves Big Night Out and Shooting Stars. These programmes made you sit up and question the very nature of comedy. He's seen as a sort of pioneer of sorts and greatly admired by other comedians.
Shallow
However, Vic Reeves at the Theatre Royal was an odd event. I've read his autobiography, which is rather dull but the two best bits he did read out. What was disappointing was the playacting. Reeves is a funny guy but bringing on the funnel and paintbrush was juvenile. He was far too conscious of having to be funny at all times, so nothing of any depth was revealed. Nick Kent, the brilliant music journalist, gave a truly wonderful session in the Festival, and talked about the need to get behind the masks of performers. In this case we got the same old superficial mask. Reeves, or rather Jim Moir, is clearly a complex guy, but all we got were simplistic questions and mostly weak humour.
Inane questions
And some of the questions were inane:
Can you do the 'Dove from above' Vic?
He cooed it down like a performing monkey and people clapped!
What's on the end of the stick Vic?
Nothing.
What's your favourite haircut?
A ramble about centre partings.
How do you like to hug?
Around the ankles.
....and on it went.
The only decent question was about who Vic rated as his comedy hero.
George Formby was the answer. Why would have been the obvious follow up - but it never came.
The problem with these events in the crass atempts to sell the book. We all know that Gordon Brown, Vic Reeves and many others are not WRITERS. We want to hear about the person, not the, usually badly written and peripheral, book.