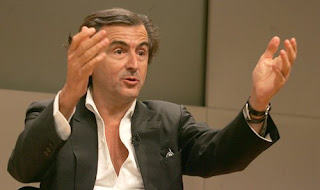 Kampfner confuses
Levy enters like a film star with a perfectly cut velvet jacket, white silk shirt showing too much of an open tanned chest. This guy loves the attention. He's no scruffy UK academic, apologising for his views and prefacing everything with a self-depreciating comment. He's well dressed (in a very french kind of way), confident and keen to talk.

Unfortunately he's accompanied by John Kampfner, who looks every inch the English interviewer. He gives a hopeless introduction warbling on about cricket, Flintoff and Jane Goody. Levy clearly hadn't a clue what he was talking about. OK Levy has an article in the New Statesman magazine - actually a hopelessly trivial diary piece that is barely worth reading, but why have a political editor interview a philosopher? You'd never have guessed he was a philosopher, as there wasn't a single sentence or question of any philosophical import.

Let's get serious
However, what we got was a serious thinker who answered questions in depth and had things of import to say on almost everything that was asked of him.

His 'secret history' observations were interesting. He saw Cambodia as the final, fateful fruit of Marxism, where some smart leaders) educated at the Sorbonne) took the revolution inside the heads of the people. the cultural revolution in China was its precursor. This turned a revolutionary dream into a nightmare. These people had read Freud and Saussure. They literally want to annihilate ideas that were incompatible with their future vision. It didn't work and can never work, Revolution is now dead.

Levy railed against politicians who saw society as having ills that had to be cured by political intervention. This, at its most extreme, took place in Pol Pot's Cambodia. He then contradicted himself several times by using the terms 'sickness' in diagnosing several contemporary political events.

Iraq, Israel and Islam
Politically he didn't blame the neo-cons. He saw the failure of the west, not in their support for democracy, but in their lack of support for real politics. He did see this as a clash of ideas and saw in radical Islam ( Muslim Brotherhood, Al Qaeda), as opposed to moderate Islam, fascist ideas, that ultimately came from Europe. I lost him here. His point about an arab legion behind the German army was exaggerated. There were arab troops on both sides. In Lawrence Wright's masterful work (The Looming Tower) on the roots of the Al Qaeda and the Muslim Brotherhood, no mention is made of these European influences. Indeed, Qutb spent his formative years in the US, not Europe. The Bin Ladens are far more familiar with US than European culture. Al Zawahiri and others have their intellectual roots in the Koran and Islamic history, especially Wahabbism. His analysis here is stuck in a francophobic, eurocentric analysis, far too influenced by his Zionism.

French philosophers have a habit of regarding themselves as experts on everything. In this case levy made a stupid pronouncement on obesity, claiming it was higher in the US than in France. This is complete and absolute nonsense. Study after study shows the difference between the two. The US has much highre levels of obesity. He then made a comparative claim about psychological obesity - the tendency to want things to be big - airports, companies, houses etc. This was all for effect. It's medical and metaphorical noise.

Asked what cliches he had found in the US, he replied 'none'. He found the place quite free of the cliches he himself had before his long visit. Europeans have a 'smog of cliches' about the US. Interestingly he called Michael Moore a rightist, as he's only interested in what happens within the US. He has no internationalist political attitude. Many things in the US he loved - its philanthropic spirit (which barely exists in Europe).

Ghosts
The right and left in Europe bring their ghosts - historical events, theories and so on. However, his ghosts seem to be the now tedious 68 student riots and Algeria. These are French obsessions. An interesting question about allowing Turkey into the EU was met by an attack on that country's suppression of the Armenian Genocide. However, he thought that in the long term, it would be a good thing.

I left feeling that it's maybe right that we in the UK have a healthy disrespect for preening French intellectuals.

what more could one ask than serious thinking from a Philosopher when asked practical rather than theoretical questions, especially when the topic of the evening was BHL's book American Vertigo and the subject of the Iraq war and the middle east is uppermost in our minds. The evenings discussion could have unfolded very differently if Plato, for example, had been the subject.
On the question of obesity, I think it was interesting to hear BHL's analysis that it is not just confined to the US but the West in general and he was polite enough to include his own country . It was a fascinating evening.

Fair enough on the 'lack' of philosophy. But he actually claimed that the US had less obesity than France - this is simply untrue.