http://www.blogger.com/template-edit.g?blogID=27684744 ARTYFACTS: Homer’s Illiad – there was no Homer nor a book called The Illiad - discuss 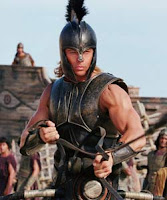 Nearly 3 millennia later we’re still keen to discuss Homer’s 8th C BC tale. Charlotte Higgins (arts correspondent Guardian), Tim Whitmarsh and Mathew Fox, (two academics) got their teeth into the who, what, where, why and when of Homer's Illiad.
The two academics were on the ball, picking away at the mystery of authorship. It would seem that Socratic ignorance is the rule when it comes to Homer. We don’t know who wrote the Illiad, Homer may have been a made-up name, we don’t know whether it was one or many authors, nor do we know if the current text is right, or whether there is one text at all, as it would seem to have been part of a long process of oral singing and storytelling with improvisation at every turn. (There is, however, real doubts about Book ten, which is stylistically different, and doesn’t quite fit.)
Now I have a confession. Although I’m a keen classicist, visited Greece many times to visit Mycaenae, Sparta, Nestor’s Palace and other Homeric sites, stood on the hill of windy Troy and read a pile of Greek philosophy and literature, I’ve always struggled to read The Illiad. I suspect I’m not alone. The first four books are long-winded and the whole book seems extremely repetitive when ‘read’ from the printed page. This is not surprising, as it was never meant to be read. We treat The Illiad as a book but it was never intended to be written down, published or read. It is an oral text, meant to be ‘heard’. That’s why it’s so odd in print, full of repetitive phrases and odd imagery.
I have always been taken by Plato’s point (through his mouthpiece Socrates) in Phaedrus that an oral tradition gets fossilised by writing into a lifeless form.
“If men learn this, it will implant forgetfulness in their souls; they will cease to exercise memory because they rely on that which is written, calling things to remembrance no longer from within themselves, but by means of external marks. What you have discovered is a recipe not for memory, but for reminder. And it is no true wisdom that you offer your disciples, but only its semblance, for by telling them of many things without teaching them you will make them seem to know much, while for the most part they know nothing, and as men filled, not with wisdom, but with the conceit of wisdom, they will be a burden to their fellows.”
My question to the panel was, “Given Plato’s warning about the fossilisation of an oral tradition in writing and print, wouldn’t it be better to teach this classic, not from the printed page, but from film ‘Troy’ or as an ‘audiobook’?” Ok, I was pushing it but wasn’t entirely convinced by his answer, “That it needed a rhapsodist to tell it well”. That’s exactly what good audio books do, the narrator, usually professional actors, play out the story.
Not sure that we needed Charlotte to tell us the entire plot at the start nor the “Was Achilles gay?” issue entirely necessary (academics had their doubts on this one but Charlotte was dead certain that they had had sex) but her point about Helen was interesting. She’s the insider, weaves a tapestry as the war unfolds and has the last word at the end of the book. This was a good enlightening discussion and debate.