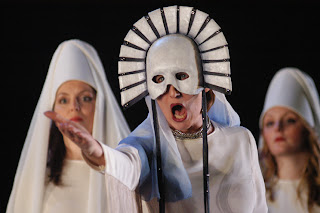 Witty translation
Sometimes witty translation kept this performance going and it was certainly an entertaining evening. The Rouseauesque set (I think the huge doors were illustrated from The Snake Charmer at The Musée d'Orsay) was suitably ambiguous and fine for showing opera in a small theatre, but it did lack punch. It was also hard to take the supposed hansome Prince seriously, as he did look a like an overweight bank manager. The 'Queen of the night' aria had been a highlight in Edson Cordiero's performance a fewq nights earlier. It was good to hear it in its true context a few nights later. Sarastro, at the other end of the scale, looked, and sounded, a little stilted.

Don't over-egg the descriptions
Rather strengely described as a 'staged fusion of opera, acrobatics, circus, puppetry and thrilling high wire action' on the Festival website. Acobatics? Saw none. Puppetry? Some children simply lifted the tail of a wooden tiger and a stilted bird was manipulated with no real skils at the side of the stage. High-wire action? Three kids were dropped down in a fixed position. Hardly action.