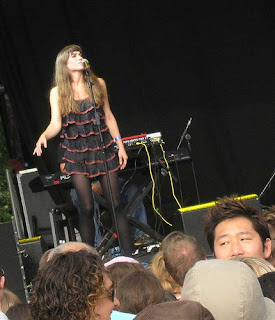 Attention-deficit audience
I mentioned earlier in the week the disgust that Sean Hughes had with his Brighton audience, who kept interrupting by going off to the toilet. Tonight was similar. The crowd talked over every act except the last - some shouting but mostly ignoring what was happening on the stage. Clearly the idea was to come and out and have a chat with your mates. But surely you can do that in the pub. Patrick Watson made an appeal to the crowd to listen and not chat, 'come with me on this one' which they dutifully ignored, as they were too busy chatting to listen. This, combined with the excessive use of mobiles, blinding anyone behind them, took the momentum out of the event. Ho hum.
Nouvelle Vague
Nouvelle vague are more than a tribute band. They bring a sort of innocence to old punk and new wave songs. They specialise in lilting versions of 70s and 80s songs from the Clash (Guns of Brixton), Buzzcocks (Ever Fallen in Love), Visage (Fade to Grey), XTC (Making Plans for Nigel), Dead Kennedys (Too Drunk to Fuck), The Cure (A Forest), Billy Idol (Dancing with Myself), The Understones (Teenage Kicks), Echo and the Bunnymen (The Killing Moon), Bauhaus, Blondie (Heart of Glass), The Smiths (Sweet and tender Hooligan), Joy Division (Love Will Tear Us Apart) and others. Great to watch and curiously melancholy. never seen them before but glad I've seen them now.
Patrick Watson
Patrick Watson's has a voice. It soars, and although the many extended high notes sound like Coldplay, he's not content to play that game. He loops his voice live, keeping the sound wild and generally hammers out songs with a band that verges on the manic. The drums were at times overwhelming, as I mostly wanted to hear more of Patrick and less of the band.