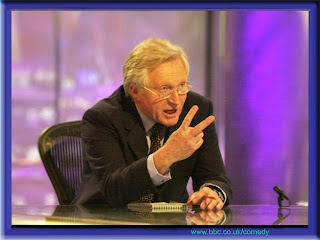 Unlike Bernard Henri Levy, David Dimbleby felt he had to apologise or explain his pink shirt and socks – how very BBC and very English! Although this talk was in the books and debate portion of the festival, it’s really about a forthcoming TV series on British Architecture. Books accompanying TV series are rarely worth reading as they’re not written by writers and usually exercises in celebrity, cash extortion. It's interesting to see that most of the 'sell-outs' this year are around TV stars and not authors (Joan bakewell, Victoria Wood, Shami Chakrabarti, Vic reeves, Andrew marr, David Dimbleby). Perhaps it should be called TV, books and debate.

Nostalgia
Dimbleby showed us several clips from the TV series, and very nice they seemed. Very BBC. Beautifully shot but very much like days out at National Trust properties. I wonder about choosing a ‘current affairs’ journalist for such a task. He’s no expert, merely a ‘presenter’. His ‘Pictures of Britain’ I thought dull. One thing we’ve learnt about TV is that experts who can also present really do add to the watchability, gravitas and depth of these programmes. He did admit that he was third choice for the job, with Parkinson as first! Dimbelby’s one of those guys who benefited from obvious nepotism at the BBC. I worked with a BBC film editor for years and he would tell of the repeated father/son, even grandson combos that would regularly appear on credits. The audience, like that for Leslie Philips was getting on a bit (myself included) and it struck me that architecture in the UK is stuck in nostalgia. We even have nostalgia for TV presenters such as Dimbleby. Surely we could have found a young talent to present such a series, how about the daring idea of a real architect!

West pier
For example, the audience cheered when the restoration of the Brighton West Pier was mentioned. My heart sank at this point. This hopeless cause has nothing to do with architecture (certainly not restoration) and everything to do with nostalgia. Even worse, we’re facing a new council that is likely to be hostile to anything new.