Day 9 - Hell gets even better 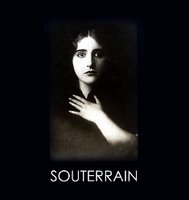 What a beautiful experience. The audience gathered as the sun went down, the village band played and then, in the distance, six soldiers appear back from the trenches. Orpheus is reunited with Eurydice but tragedy strikes as she's blown up by a mine (I think - as she literally exploded!). At one point, as Orpheus was struck silent in his grief, all you could hear was the sound of wild birds in Stanmer Park singing at sundown. These sounds, smells and changing natural light allowed the performance to cast its tragic spell.

We then follow Orpheus in his search for Eurydice in the underworld. As we enter, Hades warns and welcomes us, but we can't enter before a party of 13 dead people who suddenly arrive from Crawley. Then we're off on a magical walk through Stanmer Village. This use of the village in the dark was inspired. It was the star of the show, lit windows, the dead living in their houses, old man on his porch, their own memories in little shrines in their own gardens, even a dead cloaked child. This is not Milton's Hell (I entered that grisly world on Wednesday - see Day 5) but an altogether different Greek concept - much more agreeable.

We're asked to write, either what we want to forget or remember, and everyone hangs their memory on a sort of pagan shrine. I was with my family and none of wanted to tell the others what we wanted to forget. This is quite deep audience participation.

The Underworld is not without its fears and we're followed, way up on the hillside, by two spooky white figures. Then, as we enter, surgeons operate on a women, remove her heart and weight it on scales. The big barn scene is very atmospheric as the music echoes off the roof and walls, and we're plunged into darkness. Here Persephone appears - a beautiful woman in a stunning green dress who sings to us in the dimly lit barn. Hades and Persephone give Orpheus his awful choice.

Then off to the Pool of Memories where Eurydice is stripped of her memory. This is just wonderful. The whole thing evokes a gentle mood, a mixture of nostalgia, love, loss, warmness and wonder. I'm a tough old nut to crack emotionally but this got to me. From start to finish you transcend into another world, an emotional underworld.

As we leave, Hades and Persephone bid us farewell promising that we'll be back. Then the final reunion and tragic ending - I won't give it away, as you may still want to see the performance. Get a ticket, steal a ticket, bribe someone, sneak in, do what you can to see and experience this unique journey. This is something I will never forget and would never want to.

I'm enjoying this... stuck at home looking after kids too often I can live the festival through you. Lovely stuff...