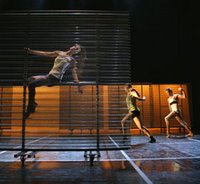 With architecture it is especially difficult, it is fixed, geometric and functional (architecture, unlike most art forms has this at its core). This tends to reduce it on stage to props and backdrops. To be fair, Flamand attempts to break down architectural forms using mobile mesh-screens (favourite material and device of his architectural collaborator Perrault) but all too often the mesh screens are just inert props, and often obscure and interfere, rather than enhance the dance. This problem becomes obvious when the dance really does come alive and you forget about the mesh screens – they become invisible. The five by five square grid – a sort of stage/city plan worked better. This an important point about dance – it works when the mechanics of it all become invisible and you are transported into a world of beautiful form and movement.

The only example I can think of where dance and architecture successfully collide is in free- running, where the buildings are integral to the movement and the huge variety of urban dance, which seems to be part of, and emerged from, urban landscapes. It may have worked better with more recognition of urban dance, and indeed, when this did happen, the piece came to life.

Fusion of dance and media
The other attempts at media fusion sometimes worked, but rarely. The epigrams (to slow down, to be with everybody, to be a star in Japan, to be happy) were trite. Again the representational form of language intrudes rather than adds to the performance. Leave the epigrams and aphorisms to writers, not dance directors.

More successful were the projections of virtual dancers alongside the lead. This was thrilling as your eyes flitted between the real and unreal. The huge projections above the dancers also worked, sometimes. It’s interesting to see a dancer’s body blown up to 30 foot or more or details of the dancer’s face – overcoming a major limitation of live performance. Here the mixed media really did blend.

Fusion of contemporary and ballet
Separate from all of the external trappings was an attempt at a fusion of contemporary dance and ballet but the seams were all too obvious. And while we’re on the topic of seams, who designed those costumes? They were straight out of a cheap, 60s, television, sci-fi series. Who says the French have a monopoly on fashion?

Modernism struck long and deep into architecture. If you want to see the wonders of Modernism and how modernist architecture plays a central role in all of our lives, go to Modernism exhibition at the V&A, with its blueprints, drawings, photographs, objects and excellent films. It will make your mind dance.

Dance and architecture, remain in this case, an oil and water mixture, of an exciting cocktail. There’s the illusion that one informs the other – in this case they don’t

Streets of Brighton
An afternoon of street theatre saw a South American band pulse out some Latin rhythms. Foreign girls danced, English guys watched, all apart from a lone madman dressed in white gloves and flame-covered trousers, shirt and baseball cap. He danced a manic Michael Jackson, frightening kids and adult alike. Fun hour or so walking among the acts.

Polly Toynbee, the new chair of the Festival, made a sound point when she asked the obvious question – why don’t they close this area off permanently? Good point, it’s not an essential artery and the area is becoming the new focal point, away from the stag and hen parties of the south lanes and seafront.

For this lunchtime gig, Rise Kagona teamed up with Doug Veitch, an edgy Scots musician, to play some lively African tunes. They all live in Scotland and I suppose Brighton is as near to Africa as you can get in the UK without getting wet.

They joked along, got the audience to sing and a couple of brave souls danced down the front. It must seem very odd for African musicians to play in front of stiff, almost expressionless English audiences. It’s so far removed from a culture that is openly expressive and wouldn’t dream of an event like this without being able to dance. But it was a hot, sunny day and African rhythms seemed appropriate.