Day 18 - Cooped up in convention 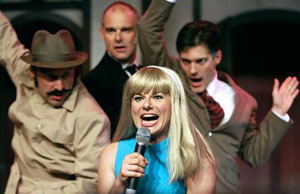 Oh how we laughed. Farce, for me, is like Chinese food, fine at the time but soon leaves me feeling empty. As for the endless puns, farting, burping, butler’s funny faces, funny Spanish foreigner, wigs falling off – it was the usual jaded stuff. However, the performance did lift itself out of these dull conventions with some new and inventive material. This included; a good Yiddish swearing skit, the stiff body piece, a substantial dose of nudity and an explicit ping pong gag. This took farce out of its safe zone. It could have done with being even more dangerous. In the end, really nothing more than a staged ‘Carry on…” movie.

Chris Wood
I'm not so k

een on over-nostalgic folk songs, and when Wood looks at the modern world, he doesn't like what he sees. The lyrics are melodramatic and maudlin, with none of the subtlety and musicianship of celtic folk.

At times this attitude trips over into Countryside Alliance values and even worse in the lyrics about St George fighting the Turk. And is it right for a professional singer to repeatedly hesitate and forget his lyrics? I'll reserve judgement on this as it's not my type of music, nor my culture. The audience adored him.