David Hockney – the wood or the trees? (Royal Academy show) 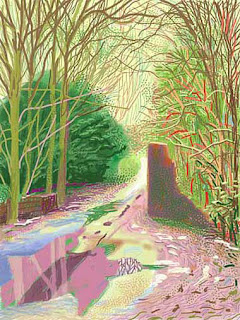 A bigger picture
Over the last few years I’ve walked and cycled through the woods in Stanmer Park on the outskirts of Brighton. It’s one of my favourite places and as every walker and cyclist will know, it’s astonishing how the same place can appear so radically different from season to season. Hockney also got to know his Yorkshire landscapes through cycling a a boy and has invested the time and effort to capture this cycle. But there’s something odd about these landscapes. There are no figures, not an insect, bird or butterfly, only the earth, plants and trees. It is all flora and no fauna. This is a problem for landscape painting. The joy and meaning of a walk in the woods or down a country track, are the sounds of birds and the wind blowing in the trees, sometimes the crack of wood on wood, and the smells. Painting can, at times, emasculate experience. So what does it do to compensate for these losses? Is he not seeing the wood for the trees?
For Hockney, I suppose, it’s essence. This is an architectural essence, an essence of form, highlighted through the use of colour. That’s fine but it falls short. I still miss the detail of snowdrops, bluebells, fly agaric mushrooms, bracket fungi, butterflies, insects, birds, rabbits, sheep or even cows. A wood is a complex habitat, not just a bare cathedral of trees.
Thixendale Trees (and clouds)
The opening salvo is wonderful. Thixendale Trees is a row of trees shown in each of the four seasons. Of course, it’s not just the trees, but the ploughed, sprouting and wheat filled field along with the grey to puffy, cumulus clouds that speak of the seasons. I’ve become a cloud observer after reading Pretor-Pinney’s The Cloudspotter’s Guide, a wonderful insight into those things that float above our heads but about which we know so little. Once you know a little about how they form, even the contrails from aeroplanes become interesting, artificial clouds, a stream of water vapour the by-product of combustion, turning into ice crystals a wing’s length behind the plane as it hits temperatures of -50.
Trees
Who doesn’t like trees? They’re so damn big, solid and impressive. And hockney gets this in the Woldgate Woods room, that places you inside the woods. Again it’s the majesty of the trees and their permanence through the seasons. What’s odd is moving through this room with a crowd of well-heeled art lovers, as you never find this many people in a quiet grove in the middle of a forest. To see this show properly, pick a quiet time on a quiet day.
As Colin Tudge says in another of those books that changes your view of the things you see everyday, The Secret Life of Trees, “being big requires a lot of engineering”. The sheer physics of transporting water and food up and down such a structure and the fact that all of this wood and leaves is conjured chemically from thin air, light and water, are the real miracles. Art’s great but art plus science is greater still.
Timber lives but it also dies, often at the hands of man. Logged timber is often a sad sight, like piles of bodies, and in the Trees and Totems room, you get death. The logs are laid out horizontally on the ground ready to be removed, stripped of their roots, branches and leaves, right next to the living forest. The log ends are like wounds and the still standing stumps like amputees. I never like seeing logged stumps, still standing, of living trees. I still remember flying in to Gatwick from Mexico in 1987 and seeing hundreds of huge trees lying, all facing east, felled by the wind. It was like a nuclear disaster – incredibly sad.
Grand Canyon
The Grand Canyon defies capture in photographs - it's too big. That's the problem Hockney tackles. However, I'm not sure that this collage of canvases, each with their own vanishing point is the solution. The phto-collage is better, as it also captures changes in light during the day. But this idea of painting capturing the essence of glanced perception doesn't work for me. The architectural images of mills and houses also fail.

iPad
Trees are the masters of the forest, they are the forest, but what these paintings often miss, is the detail. Thankfully, Hockney redeems himself in the 51 'winter to spring' iPad prints. Here we see flowers, blossom, stalks, leaves and details of smaller plants. A group behind me, when they realised that these were iPad paintings, dismissed them immediately, such is the snobbery of so called art fans. What they want is nostalgia, the history of art, not the real deal. For me, this is the best of the shown work.
When you look around the room you see dozens of very large beautiful prints, but there’s something odd about them – something clean. Get close and you see why. Try an iPad paint package. You have a huge range of brush widths and effects, as well as the ability to digitally repeat a shape, all of which Hockney has mastered. (Well, mastered over time, as you can see a progression over time as he gets to grips with the tools.) Then there’s the huge palette and the ability to erase and easily overwrite. Hockney really likes the immediate identification of a palette in the field on an iPad. This is obviously difficult in paint. There’s some wonderful in painting trees, plants and landscapes, as repeating and overlaying lots of tiny flowers, spotting leaves, streaking out stalks and getting a rich and consistent palette, makes it work well, without destroying the act of ‘painting’. This is a breakthrough in art and it took a 75 year old artist to realise its potential in landscape painting.
This iPod art throws up some interesting issues in aesthetics. Produced digitally on a small screen, they are reproduced, as very large prints, at over ten times the size. So there are several differences between the original work and the displayed version. First there's the rescaling, which produces a work that is much. much bigger. Second, it is backlit on a screen but relies on reflected light as a print. Thirdly,the digital artwork is now an analogue artefact. I'd love to see Hockney take the lead here and distribute this art free on the web or sell them for charity as digital artworks.
Virtual walk?
It was odd to see 150 or so urban, largely city-dwelling, art lovers sit in serried rows staring intently at a country walk in high definition video in the Royal Academy. The images, shot from 9 mounted cameras, are hyper-real but completely silent, even when the wind blows. The idea is to present the glance experience as we cut from glance to glance and do not pan. That’s the aim but in practice vision does not present as a 3x3 grid. In the end it turns into a virtual walk, or slow glide, as it’s painfully slow. Weird but far from real. Where it succeeds is in representing time and so avoiding the single image problem. We walk, we glance and move through landscapes.
Padding
Lastly a word on the padding. Blockbuster shows usually overreach themselves by going way back to uncover early, often poor material, to make the show ‘bigger’. It seems to me a confusion between curatorial goals, the history of art and art itself. Here, the early canvases are a disappointment. Rocky Mountains and Tired Indians and the canyon paintings were lame and as are the earlier Yorkshire landscapes. The Sermon on the Mount room is completely incongruous and could easily have been left out of this show. You want to remain immersed in landscapes, not bounced out into an esoteric study of time and space using a derived image.

I would also like to have seen the iPod prints displayed as iPad images. There's something half-baked about taking a digital image and creating a huge print just so you can show it in the Royal Academy, where they expect prints or paintings. I’d much rather have had the iPAD prints arranged in one row, rather than the second row at 10 foot high on the wall. OK I’ve got that out of my system. Is it worth it – this show? Damn right it is….a thing of great beauty.

Don, its intriguing to see the show dissected in this way. You've put a lot of thought into it.

I just found it a stunning visual experience. I went in feeling slightly down and under the weather. I left feeling uplifted and with a smile on my face.

Some of the paintings (the grand canyon, the yorkshire village, some of the woods) and jsut overwhelming. And me and my boy (14 yrs) were quite fascinated by the 3x3 videos.

For me, one of the best exhibitons I've been to. Highly recommended.