Day 1: Festival Blast off with Eno! 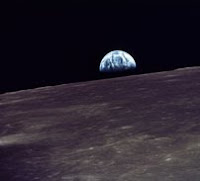 Brian Eno’s a charming, self-effacing chap but he introduced tonight’s event with knowledge and some passion. Landing a man on the moon is surely one of man’s more wondrous and extraordinary achievements and Eno was so enthralled by the event that he wrote an album about the Apollo moonshot. Rooted in the adoption of Nazi rocket scientists it was, nevertheless, JFK who, on discovering that the Russians were streaking ahead, promised to get a man on the moon before the end of the decade (60s). He wouldn’t live to see that day, but if Martin Luther King had a dream, JFK had an outrageous vision. It took until now to realise Martin Luther King’s dream through Obama, but JFK got there first.

We’ll probably not see another man on the moon, but at the time it was one of the few events that galvanised the whole world, satellite TV had just been made possible and it felt as though we all participated. I, like anyone else over the age of say 45, all remember where we were that night, and those fuzzy images on our tiny TVs, with no remote control and dodgy reception. But Eno had a surprise. How many of us knew that the astronauts took music with them on their trip to the moon? Country music! So the album he created was a form of Country music free of gravity, free of the crass lyrics and leaden melodies -lighter and airier, even airless - spaced out.

6 million feet of film (the digital age was a long way off) condensed into 50 minutes. Panning up the side of the Saturn rocket showed the majesty of the rocket when earth bound, with a beautiful shot of it lit up by Hollywood spotlights , then the take-off and nail biting in the control room. The two sub rockets peel off and we see the earth recede into the distance.

One problem with a movie like this, is that you don’t get a sense of time. It took two and a half days to get to the moon but seemed to take minutes. Poor Michael Collins never really got a look-in, he was the guy who was looping round the moon on his own while all the world and his dog was goggling the moon guys. He would later describe how he felt like the loneliest man in the universe on the far, dark side of the moon, further away from home than any man.

Another omission is the key sounds and phrases – the roar of the rocket on take-off and ‘The Eagle has Landed’. I would also have liked to have heard some of that ‘good ol boy’ country music they had in the claustrophobia of the capsule.

I’m not sure but I think that though the film was about the first moon landing, there seemed to be lots of footage of the later landings, when the moon buggies came into their own. These buggies were to shape the future of all space travel, as manned missions dropped off and little robots were zapped off to other planets, like Mars, capable of doing far more for far longer than any human machine.

Later, I walked away thinking that this experience, fantastic though it was, reflected the world's reaction to the moonshots. Art doesn't cope well with science. We'd rather 'surrender' to the pleasures of the concert hall, theatre, cinema or TV, than do the hard work necessary to understand the physics, astronomy and technology of the missions. The danger, an argument that goes back to Plato, is that art appears to enhance but actually smothers the real experience. On the other hand, I'm happy to do both - on that note I highly recommend Moondust by Andrew Smith - a brilliant account of the Moonshots with a focus on the astronauts.

The little man gave us a few songs at the end. It wasn’t genius but the songs were in line with his calm, reflective approach to music. The audience loved him, with chants of ‘Eno, Eno, Eno’ rising up at the end. What I loved about this was, that as the guest Director of the Festival, he was getting up there and giving it his all – talking and performing. Couldn’t get ENOugh of the man – so I’ve book up for the six hour This is Pure Scenius session on 9 May.

To see interview with Eno on this event click here.