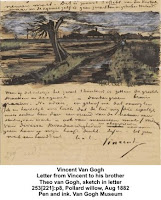 The Van Gogh show at the Royal Academy is unusual as it has as many letters as paintings. He was a habitual letter writer. Like a blogger, he felt compelled to pour out his thoughts and plans. Fascinated by the process of becoming an artist his letters, like a blog, includes sketches and watercolours in the letter itself, sometimes among the text. The work was not enough, he had to verbalise the process.

You hear about the sheer effort he put into learning his craft, slowly mastering drawing, perspective, watercolours, portraits and landscapes. There was no quick spurt of divine inspiration, only the long march to competence. Van Gogh’s work would have been unknown if he had gone to Art School, as it was the inner struggle, against the odds, that made the man and his work. He was free from the groupthink of other schools, even that of Paul Gauguin.

As the show, and blog, unfolds through his letters, you also get a peppering of surprises. I never knew that he was a teacher in London, an avid reader (even painting books) or that he worked in watercolours. And as he drifts south, the palette and subjects change. That’s the key to the show, the geographical influence in terms of light and colour. Ultimately it’s nature and its organic forms that matter most, in palettes of green and yellow. There’s no water in these images and the clouds seem out of place – it’s the earth and its crops, grasses, flowers and landscapes; and the cycle of growth. The landscapes are alive with colour.