We commissioned Kapoor for this year's Brighton Festival, and it was a huge success, indeed the focal and talking point of the entire month. So I was looking forward to this retrospective.
Balls of steel
The RA courtyard has a huge tower of atomic, steel balls, but randomly piled to produce lots of unique reflections, not only of each other but of the buildings and viewers. As they're spheres, nothing remains of the expected perspective. All straight lines become curves. The top few blazed away in the winter sun. The only piece I've seen surpass this in the courtyard was Rodin's Gates to Hell.
Pigment piles
I like the colour rather than the forms. They seem far more intense than paint. Red, black and yellow. But this is like a predictable starter. You already know, with Kapoor, that piles of pigment are on the menu.
Mellow yellow 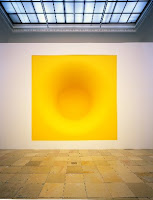 This huge square is painted in a uniform yellow colour but as it has a deep hollow the light gets progressively weaker and the centre darkens. What really works is getting up and close, so that your peripheral vision is flooded. It's like being in a yellow universe. In this position, as the eye has no depth cues, it's seen as a flat expanse of gradated yellows. It's like walking into colour.
Cannon of colour

A simple steel cannon is primed with pressured air, by a rather serious looking RA bod, then fired every twenty minutes. First time round, we simply saw a sorry slug drop like a slow dogshit from the end of the cannon - a misfire apparently. He reloaded and it was fine. You can see the cylindrical slug of wax move through the air then hit the back wall of the joining room. Our third shot hit the back wall high and hard. You can hear the roar of approved laughter throughout the gallery. Definitely cathartic. This was fun and the mess in the room was true chaos, an absolute cannon up the backside of the stuffy RA.
Mirror magic 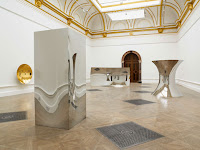 Kapoor excels at mirror works and this room allows you to see yourself distorted in a thousand ways. It's fun, and surprising, to work out why you appear upside down, fatter, or in a repeated pattern across a huge concave surface. You forget that light travels only in straight lines.
Vaginal openings
The huge rust-coloured form, that filled the next room, has a vaginal opening at one end, through which one peers into the iron darkness. One then steps through some rather disappointing piles of hardened clay forms to another room with a similar red, crystalline opening and an intestinal tube coiled around behind.

Wax train
This is the centrepiece, a huge block of red wax on rails moving through three doorways across five rooms, being shaped by the doors. The building becomes the sculptor and the form is dictated by the door template and scrapings.
One great frustration is not being able to feel the stuff. You long to stick your fingers into the wax and rub the pigment. For £12, I'd have given everyone a small tub of the stuff to take home and do their own sculpture.

Whatever this is, this is not art. None of this impresses or serve any purpose let alone enhance aesthetic sense. Art should make us respond in a very positive way. This is mere waste of resources. Whatever it is bringing about, like distortion through mirrors or steel spheres all is there already around us. The mirror thing is a cheap imitation of the circus tents where they had this room with mirrors that distort the images. The cannon, well try observing how the seed pods burst and what a beautiful event it is compared to mess that is sticking around the pathetic cannon. This is mockery of art, take a small child and show him or her around, they will tell you if it is art or sheer nonsense. At least children are truthful. This is better than the innards of animals and humans displayed in formaldehyde in some so called art installations, but still this is juvenile and if people pay 12 pounds for such senseless work, I seriously doubt their sanity. Am sorry if I am too critical but I can't help observing how dry and disoriented our sensibilities are becoming.

Hi Rina
This view of art is common but in Kapoor's defence, what I wtnessed in the Royal Academy yesterday, was interesting. First, an audience that was enagaged, even talking to each other (this is unusual in English art galleries). The works promoted reflection, both physical and psychological. People were looking at themsleves and others ina different light. They were literally looking at a different light and moving beyond the normal perceptual boundaries of perception (and more traditional art). The canon mocks the stuffiness of tradtional art and the 'disinterested' aesthetic.

What I also witnessed were dozens of young children absolutely loving the show. they really were animated, amused and being pushed beyond the banaities so common in the daily grind of school.

I'm with you on Tracy Emin and Hirst but Kapoor is something else. This is not relevant to the debate but Anish Kapor is from India (Mumbei, I think) and in some of the works, the pigment piles, that sensibility is strongly present. But thanks for the comments. As always, they made me think.

Hi Donald,
I want you to ask your self is the cost that is incurred in creating such 'art' worth the 'shock effect' it creates. Why were the people talking? Did this exhibition add on to their learning or was it a little amusement that they drew out of looking at the distorted images. Can they not be similarly amused at the next door Science museum with convex and concave mirrors?

If this is the state of communication in the UK,should not the people responsible for the communities' interaction. Are people so numb that they need 'vaginal opening' as a walking space to talk? A lot of introspection is needed on this front.For example, if instead of that wax path that passed through many rooms there was some thing live, say flowering plants or sprouts or something with wood, stones or metals that had some form of craftsmanship would that not be more conducive to bring about interactions?

I get your point that when things are common place and usual there is no interaction, no excited discussion but then is this the only criterion for art? If it is then let us cage rape victims or murderers and let people talk that will whip up a frenzy won't it? And it would be art installation that will surpass all such exhibits where 'engaging' audience is the main aim, but how it can be done while being honest to this medium is not important.

You said kids were animated, if you have observed the young ones, you will see that they are mostly in the present moment and mostly engaged in whatever they find around. If you ask a four-year-old, it is then you will get an honest and blunt opinion about this art. In a way you are right it is something a child can create and relate to as kids create absurd things and then destroy them.

Anish could have been from America or Africa or space but his sensibilities make me wonder about how far we have come from the reality. Anything projected as posh and complicated or upmarket is 'fine art'. Not for me,as always your posts bring about a lot of learning even when I agree with your view. Thanks for sharing.

I can tell you which one I like...but you can probably guess that allready:)

I visited the Royal Academy to see Anish Kapoors exhibition a couple of weeks ago and it was buzzing. Kapoors all about space, scale and getting the viewer involved and thats exactly what he did. I totally agree, im not into Tracey Emin or Damien Hursts works either but Kapoors on a different level. Rina should watch the documentary that was on about him not long ago and look at "C curve" and "The Bean" and see the positive impact they have on the landscape and the people that view them. I paid my £12 and im far from insane.