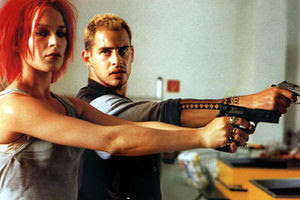 Tomb Raider on steroids
Run Lola Run (Lola rennt 1998) is a pacy play on fate and choices. The film literally sprints along. This makes it perfect for the punchy, fast, loud music The Bays provided. It bears more than a passing resemblance to a video game, with its repeated sequences (plot plays out 3 times over), back to the start after catastrophic deaths and character running through 3D urban streets, bumping into people, shoot outs; like Tomb Raider on steroids. It also draws from music videos, with cartoon sequences, sequences of stills cut in rapid succession and an episodic structure that suits live music. At one plot point the audience shouted out with joy when Lola wins an outrageous bet in the casino. How often do you hear that in the cinema?

The Bays
The Bays throbbed away, not afraid to cut to silence when the scene and dialogue demanded. In other examples of the film/live music genre I’ve seen the music continues even when it’s unwarranted. At one point a singer made a surprise appearance to sing ‘What a Difference a Day Makes’. This reinforced exactly what was happening on the screen. The Bays don't DO albums, songs or set lists - they do live performance, and what a performance. The audience and The Bays fed off the film and each other. It was absolutely thrilling.

2+2=5
Film plus live music can result in a sort of dissonant experience where both media are diminished. In this case 2+2=5, the sum of the parts was greater than the whole. Something I’ll never forget.

Nice write-up, I like the idea of Tomb Raider on steroids. I was there too and also wrote about it on my blog.