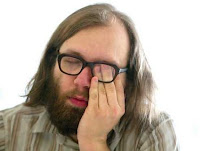 Kitson as anti-comic
Kitson's more than a comic and breaks every rule of stand-up. Yet, his technique is compelling.
He shambles on, mumbles, refers to a black book for his material, often talks to the side of the stage, drifts off-mike, asks the audience for the time and forgets where he is. I've even seen him go off stage for a shit half-way through his act. He's a sort of anti-comic.

So why was he a two night sell out? It's the supporting cast of his brother, friends (real and imaginary), acquaintances, ex-girlfirends, new boyfriends of ex-girlfriends, mum, dad, uncles and others. He weaves them into his storytelling in such an endearing way that you can't help but be drawn in. He's also a fine wordsmith. In fact, he loves language and words, rolling out phrases of real poetry, rather than the usual gag lines.

Better than bellylaughs
You don't get bellylaughs, you get something much better - moments when you smile and reflect. His personal moments become vehicles for your personal reflection - it is really something to savour. He avoids gagland and operates at the higher altitude of personal storytelling.

Look forward to seeing him in C-90 in the Festival.