Ireland has never featured large in the visual arts. Its genius is in words. This is clearly a trend that is set to continue.

Snails' face
The narcissistic photographs have absolutely nothing to offer. The artist with snails, turf, foliage, berries, twigs and a necklace of animal hearts. These are quite simply banal. They show a lack of imagination, not a good trait in

Snail as creative artist!
The tasteless plates and glass goblets with their etched 'snail trails' were ugly. The note on the wall said it all, and I quote, when it claims that the work "teases the viewer with the idea of the absent snail as a creative artist". Good god.

The House of Thorns was worthy of attention. It's a small, delicate object that just make 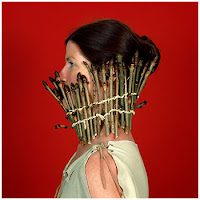 s it beyond being just clever. I wanted to pick it up and feel the pain.

The tank titled Lachrymatory didn't bring tears to my eyes, the sculpture hanging in the centre of the room was just awful and the Double-Venus, (two busts of Venus connected by a tube) was tiresome. But wait, there's more....

Great balls of snails
Four balls of snail shells sat on individual plinths. No doubt this is a reference to acts of mass suicidal artistic endeavour by the snails, or maybe it was just someone who's run out of ideas.

The comments from the hapless children and viewers in the visitors' book were priceless....

Go read the book - it's hilarious!