http://www.blogger.com/template-edit.g?blogID=27684744 ARTYFACTS: Spring Breakers - Thelma and Louise without the hubris… it will incur the wrath of almost everyone over the age of 20 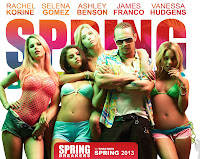 Everyone seems to hate this movie, as it has none of the expected audience strokes. No deep characterisation, no surprise plot turns, no redemption and not a single smart-assed line in the script. It’s all souped up and dumbed down. Everyone’s as shallow as a shell, a generation and culture hooked on hedonism. It stays firmly and deliberately on the surface, confused certainly, like all of these escapades, and for that reason alone it will incur the wrath of almost everyone over the age of 20. This is why I like the movie.

The flashy, fleshy drink-fest that is Spring Break shows American youth break free in a Floridian miasma of drink, drugs, sex, guns and violence. Brash, at times crass, young, white, college kids collide with black hip-hop and street culture. But there’s no glamorisation of the gangsta/rapper – he’s an idiot, who just loves his ‘shit’, namely money, guns and cars. (Hold on ain’t that also what white folk love?). The girls are just playing the shoot ‘em up video game. No white trash clichés here, just college kids on the rampage, no better no worse than the black, street kids. The only differenece is that they drive off into the sunset while all the black kids get mown down. It’s Thelma and Louise (without the liberal hubris).